I’m happy about my young side – Shanaka 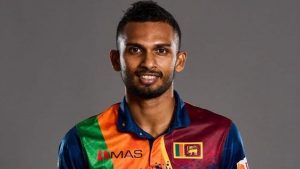 I am happy the way my young team played today (on Tuesday). We gave a very good fight against the Indians. Deepak Chahar finally took us the game away from us. When we batted, we got into a good start. But we lost many wickets in our middle-order. We should not give them easy wickets in the next match. I did not bowl much today because we had many bowling options. We need to do better in our next game (on Friday, 23 July). 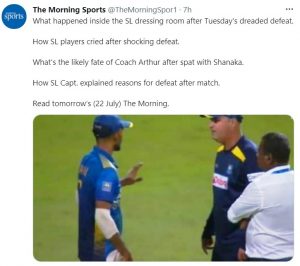 Hopes have reached high. Sri Lankan cricket fans have rallied round the team. A ‘schoolboy side’ went close to almost toppling the ‘university side’ –if one is to go by how Ramiz Raja defined the two sides of Sri Lanka and India before the second ODI on Tuesday (20)– and a team that could hardly bat out the 50 overs are now talking about why they couldn’t have beaten India! A significant improvement, for sure. A journey that is heading in the right direction.

What really happened after Tuesday’s crucial three-wicket defeat for Sri Lanka in the second ODI against India at the R. Premadasa Stadium, Colombo:

* Why Sandakan was over-bowled at crucial time?

To say the least, it was poor bowling change by the Sri Lanka Captain Dasun Shanaka, particularly in the last ten overs when the Indian eighth-wicket pair of Deepak Chahar and Bhuvneshvar Kumar at the crease — with both the batsmen not having any considerable batting record to prove.

Yet in fairness to Shanaka, he had had to depend on the best options that he had – he is one recent Sri Lanka Skipper who doesn’t have a Murali or Malinga to rely on, in key moments of a match.

Why was Lakshan Sandakan given the ball continuously when Shanaka had arguably better bowling options –like Chamika Karunaratne– when the Chahar-Kumar partnership was becoming threatening?

Sandakan has been in the highest level of international cricket for almost five years and depending on him to break an eighth-wicket partnership would not have been a bad option.

The Morning Sports reliably learnt from the Sri Lanka management sources that Karunaratne, on the other hand, was constantly having treatment for injury during the Indian reply prompting Shanaka to leave him out of the attack at that crucial juncture of the match. 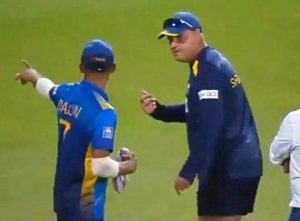 The ugly spat that was seen on a video that went viral on Wednesday (21). The characters here are Sri Lanka white-ball Captain DasunShanaka (on left) and Sri Lanka Head Coach Mickey Arthur

Sri Lanka Head Coach was apparently swearing, uttering the four-letter word soon after Chahar hit the winning four on Tuesday night. He climbed down the stairs and entered the field allegedly blaming the players. Then Shanaka has asked him not to blame the players.

‘We did our best and we need to accept whatever the outcome,’ Shanaka has told Arthur, the team sources revealed.

What the video that went viral yesterday, which indicates an ugly and unusual altercation between the Captain and the Coach, shows how Arthur tried to explain Shanaka how the latter ‘blundered’ in his field settings.

Arthur is seen in the video walking to his right as Shanaka looked on. That is apparently to show Shanaka how the captain had placed Dushmantha Chameera in a wrong place in the field in the latter stages of the Indian innings.

* What happened inside the Sri Lanka dressing room after the match? 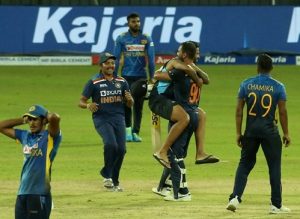 India snatched victory from the jaws of defeat on Tuesday (20) at Khettarama, Colombo to seal the three-match ODI series. Photo Pradeep Dambarage

Immediately after the match, inside the Lankan dressing room, both Avishka Fernando and Wanindu Hasaranga have vehemently criticised the three bowlers Kasun Rajitha, Dushmantha Chameera, and Lakshan Sandakan.

Fernando had been fuming and Hasaranga had almost been in tears. This only goes to indicate, on a positive note, that the national players are now getting into the groove, feel the ‘national responsibility’, and they now know that they can win and they are really upset when they couldn’t – an essential characteristic of a well-gelled and improving team which is hungry for success.

‘You are bowling your best only in the nets — Yorkers and bouncers and everything. But you didn’t bowl none of those there in the middle today,’ both Fernando and Hasaranga have told the said bowlers in an agitated mood.

‘Despite we gave everything for this match, it is sad that we couldn’t make it in the end,’ Hasaranga has said with tears welling in his eyes. ‘Shouldn’t the eleven of us now play as one single unit,’ he asked.

Arthur’s behaviour is unprofessional to the least and is a disgrace to a national team. He, as was indicated many times in the media, behaves as if he is acting in a thriller movie when the boys under his watch are batting, bowling, and fielding in a match.

On Tuesday, he argued with his Captain like a schoolboy after a game that was fought out closely. Those discussions are bound to be done behind closed doors. Even though Tuesday’s game was played ‘behind closed doors’ due to the Covid-19 pandemic, the world watched it on TV. Post-match team meetings are meant to be inside the dressing room, aren’t they?

In the eventual team meeting, Arthur has anyway emphasised the importance of facing both the win and the loss as one unit. The crux of the matter here is that Arthur’s two-year tenure with the Sri Lanka national team is coming to a painful and unforgettable end.