August 27, 2018 by Jennifer Anandanayagam No Comments

Last Monday (August 20), a social media post began to make its rounds, shared online by the animal welfare group Animal SOS Sri Lanka which described the eyewitness account of a tourist vacationing in Salt Restaurant and Bar in Mirissa. The post in question gave a detailed account of how a dog was allegedly choked to death in front of everyone present, including children, causing panic and leaving everyone traumatised.

Ruth’s (the tourist) story has been corroborated (according to Animal SOS) by many others present at the scene, including one eye-witness who’d shared his account with the animal welfare group afterwards. He stated that he was there and that he saw the perpetrators stuff the dog’s body in a bag and take it away.

Another present during the attack had gotten in touch with Animal SOS afterwards saying that when she noticed a commotion “the poor thing was already hanged, struggling for life and beyond salvation”, adding, “I am a person who has witnessed numerous deaths but it still rattled me, I’m ashamed. I was too shocked to even take a photograph as evidence.”

Animal SOS Sri Lanka feels that this incident is especially appalling as they themselves have worked with Salt Restaurant and Bar to sterilise and vaccinate dogs there against rabies, “we were very shocked to hear about this horror.”

Unfortunately, this is not the first instance where tourists have witnessed such cruel methods being adopted by hotels to remove community dogs from their property. Earlier this year, there was a similar incident shared on social media about the disappearance of street animals from the vicinity of Jungle Beach.

We contacted the Salt Restaurant and Bar in Mirissa and were directed to speak to a Basitha De Silva, who after many attempts to get a proper quote from, finally denied killing any dogs.

Where is the tolerance and kindness?

With regards to the recent incident, Animal SOS Sri Lanka provided that this is not a good image for our country and incidents such as this could affect tourism gravely. They disclosed that they receive many complaints from tourists about the mistreatment of street dogs within the island and that

“it puts people off from returning, as holidaymakers like to see tolerance and kindness towards animals, not brutality.”

“Tolerance and kindness” is ironically the country’s official stance on the matter, with the No Kill Policy being in place since 2006. 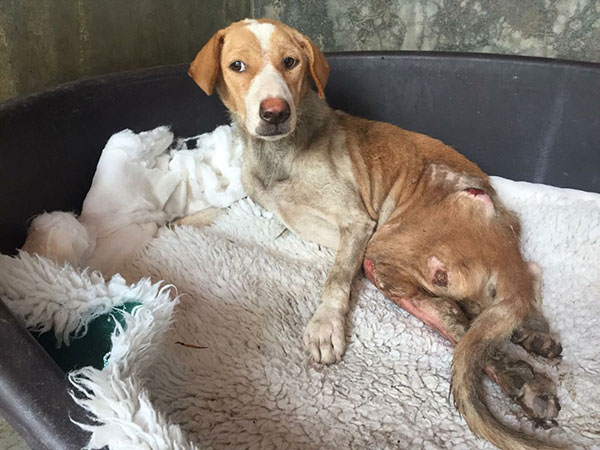 This picture of a rescue which Animal SOS shared with us shows a female dog named Nelume. She has been dragging herself around for weeks after an accident that left her disabled.

There were even wild allegations that the authorities themselves had opted for dubious methods in the past, particularly during the CHOGM in 2013, when street dogs were allegedly rounded up and relocated in shelters.

Animal SOS Sri Lanka went on to mention numerous incidents brought to their attention by varying tourists ranging from cats getting their tails chopped off, a Spanish family witnessing the brutal beating of a street dog and even a dog being pushed off of Sigiriya by a local tour guide, disabling the innocent animal.

“The government needs to bring in tough animal welfare protection legislation so the police can take action against these abuses,” Animal SOS stated, “the perception that the authorities do not take action against such brutality is frustrating to those tourists visiting and witnessing these acts, as they feel helpless, giving them the impression that no one cares.”

We can only appeal: AWPA

About the continued cruelty carried out by some hotels in these popular vacationing spots, Hemantha Jayathilake, the President of AWPA (Animal Welfare and Protection Association) provided,

“We can only appeal to these hotel chains and suggest the accepted methods of handling the street dog population, we even offer our services free of charge, but we do not have any authority to demand anything, that is up to the administration.”

AWPA is currently sheltering a street dog who was battered and beaten near a vacation spot in Trincomalee; the animal’s whereabouts and the state of its diminishing health were brought to their attention by a concerned tourist vacationing in the area.

Jayathilake stressed the importance of implementing a dynamic CNVR (Catch Neuter Vaccinate Return) method by these hotels as a way of addressing the issue of community dogs. It has been proven to be the most humane and effective means of controlling the street dog population, stating that most tourists like to interact with the animals and as long as they are safe and pose no health concerns, the business will face no issues.

An avid animal rights activist, Shanuki de Alwis noted that this mistreatment takes place most prominently within the tourist belts in the South, pointing out that even in the East, namely Trincomalee, there is a system in place, every three months, where local dogcatchers are paid to eradicate the street dog populations in the area.

She stated that many hotels act on one or two complaints made by a rare disgruntled tourist and employ dogcatchers to murder innocent animals in droves, who more often than not, are harmless.

While they should have the best interest of their guests in mind, they are committing a crime as our country has a No Kill Policy and therefore, they have no authority to carry out such actions,

“massive conglomerates act as though they are untouchable and they often are; they are guilty of bypassing the law and repeatedly go without facing consequences.”

It is quite evident that these actions by some of those in the tourism industry are not only cruel and inhumane but are actually harmful to their own interests. It appears that the culling of street dogs in the name of tourism has proven to have backfired, potentially negatively affecting Sri Lanka’s tourism.

While concerns raised within the island may be ignored, the opinions of those who are horrified by the troubling acts within our island could reach the global platform; according to the comments on Monday’s post at least, it seems that many have expressed their concern, shunning these practices, so disgusted in fact that they vow to never return.

Shedding some light on the prominent social outcry, Otara Gunewardene, founder of Embark and the Otara Foundation stated,

“With the availability of a more effective and compassionate method, there is no need for cruelty,” providing that “tourists today are far more conscious than in the past; globally, there is a general awareness and a consensus to be cruelty free.”

It is apparent that some of those in the Sri Lankan tourism industry are unaware of the reality of the situation.