Oil pipeline: Still in the pipeline 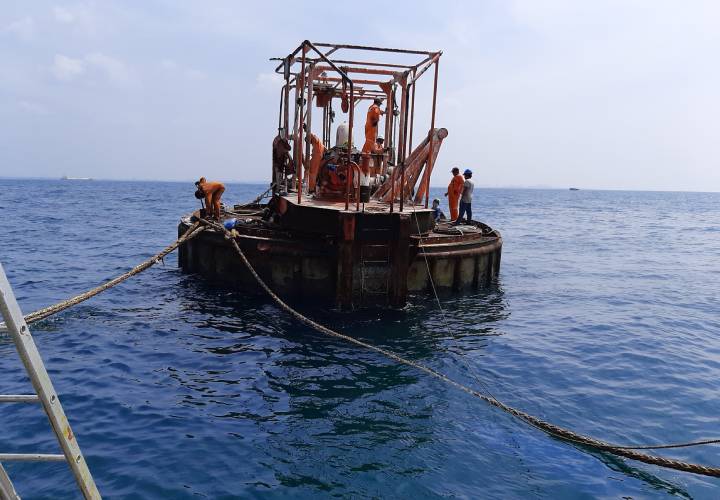 Single Point Buoy Mooring in the middle of the sea, one of the main networks Photo © CPSTL

Concerns have been raised over the delay in taking appropriate measures to upgrade the existing 75-year-old oil pipeline system to enhance the oil transportation process and thereby avert the losses incurred by the Ceylon Petroleum Corporation (CPC).

Petroleum industry trade unions (TUs) lashed out at Minister of Energy Udaya Gammanpila, saying it’s been months since he was appointed as the subject minister, but no adequate measures have been taken to rectify the prolonged issue yet.

In Sri Lanka, a pipeline network is used to transport oil from the port to storages, from a fuel tanker to the main terminals to the refinery, and from the refinery to the storage terminal to the companies, by which small-scale electricity is generated.

Out of those, the pipeline networks installed for the transportation of crude oil from SPBM to the Sapugaskanda Oil Refinery and for the transportation of finished petroleum-related products from the oil refinery to the Kolonnawa Petroleum Installation are owned by the CPC. The other pipeline networks are owned by the CPSTL, which is a subsidiary of the CPC.

The pipeline network from the Colombo Port to the Kolonnawa Terminal, which is controlled under the CPSTL, was installed several decades ago. It consists of five pipelines which were installed with a 25-year guarantee period. At present, each pipeline of this network is between 45 to 75 years old.

“Due to the dilapidated condition of the pipeline, the country is incurring millions of losses a year as demurrage charges. Leakages have been reported on a number of occasions. In addition to the financial losses, severe environmental damage has also been caused by the leakages,” Palitha stressed.

He noted that the CPC managements in the past were educated about the importance of renovating the pipeline together with the oil refinery and taking over oil tankers in the Trincomalee Oil Tank Farm, so as to reduce the losses incurred by CPC.

In a special audit report of the Auditor General’s Department, it was revealed that the maximum unloading capacity of the existing pipeline from the Colombo Port to Kolonnawa remains at 220 metric tonnes (MT) per hour, thus taking eight days or 192 hours to unload 40,000 MT of fuel, as a minimum pressure should be maintained when fuel is unloaded through this pipeline due to its very old age.

In the given backdrop, an extensive period of time has to be spent on unloading the entire stock of white oil through a single small pipeline, and it is observed that any sort of breakdown in that pipeline would cripple the fuel supply of the entire country.

The report further revealed that in order to unload 40,000 MT of fuel, it is agreed with the relevant vessel that the stock of fuel should be unloaded within a period of 96 hours. However, due to blockages in the pipeline and inefficiencies in the storage system, it is observed that a period of 120-168 hours is spent at present for unloading fuel from a vessel, thus necessitating the CPC to pay demurrages in that connection.

The Auditor General’s Department, in its report, had also recommended that the existing pipeline system for unloading oil in the vicinity of oil tank complexes should be renovated to avoid possible risk in unloading oil at the two main terminals set up in a densely populated area, public protests or environmental damage should be minimised, and an uninterrupted oil supply within the country should be ensured.

In such a backdrop, a proposal received from a Chinese company to upgrade the existing pipeline system is being debated as the TUs urged the Government to cancel the expensive Chinese proposal and to hand over the project to local engineers at a lower cost.

As learnt by The Sunday Morning, on 17 June 2015, the Cabinet of Ministers approved the construction of the new oil pipeline and to call for international bidders for the project. On 10 May 2016, then Minister of Petroleum Resources Development Chandima Weerakkody obtained the approval of the Cabinet to implement the said project as a government-to-government (G2G) project considering the dire need for this pipeline.

In 2019, a proposal was submitted to the Cabinet by former Petroleum Industries Minister Kabir Hashim to renovate the dilapidated oil pipeline at a cost of Rs. 15 billion by China Petroleum Pipeline Bureau (CPPB). However, petroleum industry TUs are vehemently opposed to the Chinese proposal, claiming that it is too expensive.

Instead, the TUs are urging the Ministry to hand it over to local engineers at the CPC and CPSTL at a total maximum cost of Rs. 5 billion for the renovation of both 12 and 18-inch pipelines.

“The local engineers can complete the entire project at a maximum cost of Rs. 5 billion while the Chinese estimate it at Rs. 15 billion. We have written to the President explaining the situation and since it is submitted to the cabinet, the TUs are opposing the project,” Palitha said.

In the meantime, several media reports claimed that President Gotabaya Rajapaksa has decided to terminate the new proposal, which is denied by the Minister of Energy saying there’s no truth in the reports as the President has neither taken such a decision nor has he informed the Minister.

Further clarifying the news reports, the Ministry said: “The President has never discussed the project with Minister of Energy Udaya Gammanpila.”

It stated that it can be stopped only by the Cabinet of Ministers, as it was a decision taken by the Cabinet in 2019 based on a cabinet paper submitted by then Minister of Petroleum Kabir Hashim.

“The Minister further observed that the previous Government had called bids without preparing even an engineer’s estimate. Hence, he has advised the CPSTL management to prepare an estimate. The Minister intends to submit a cabinet paper to revise the decision taken by the previous Government after studying the reports to be submitted by the CPSTL management,” the Ministry added.

October 18, 2020 byCharindra No Comments
The Government has confirmed that US Secretary of State Mike Pompeo would be making a brief visit to Sri Lanka, following an official and lengthier visit to New Delhi, India.

August 5, 2019 bythemorninglk No Comments
Economic uncertainty looms large after officials of the CBSL made a shocking revelation while testifying before the Parliamentary Select Committee (PSC) probing the Easter