1905 – At the Oval, against Australia, on his 33rd birthday, Arthur Jones became the first substitute to keep wickets in a Test, catching Warwick Armstrong off George Hirst. Jones was better known as a fielder. Sensational in the slips, he was credited with inventing the gully position

1950 – Birth of perhaps the fastest bowler of all time. When Jeff Thomson took 0/110 on his Test debut in 1972-73, he generated terrifying pace and steep bounce from a slingshot action. He took 33 cheap wickets to help Dennis Lillee destroy England 4-1 and regain the Ashes. Held back by assorted major injuries, “Thommo” nevertheless took exactly 200 Test wickets — 100 of them against England — and left behind memories of one of the greatest fast-bowling partnerships ever in international cricket with Lillie 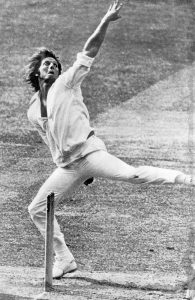 Today is the birthday of one of the most lethal fast bowlers of all time, Australia’s Jeff Thomson. He was well known for his rare and fearful high-arm slinging action

1952 – Birth of Sri Lanka’s first Test wicket-keeper Mahesh Gunathilaka, also spelled as Mahes Goonatilleke. An accomplished player, Goonatilleke established his position in the side, leading up to Sri Lanka’s Test debut in 1982. He was asked to open the batting in the second Test at Faisalabad. He performed admirably scoring 27 in the first innings and then top-scoring with 57 in the second 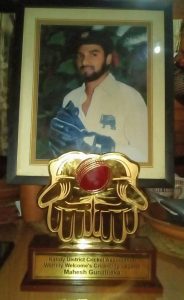 Happy birthday Mahesh Gunathilaka! He disappointingly opted to tour the apartheid South Africa in 1982-83 under first Test Captain Bandula Warnapura on a rebel tour, ending his Test career virtually overnight, yet is still remembered for his remarkable wicket-keeping abilities

1974 – Birth of Hungarian Swimmer Krizstina Egerszegi. She is a five-time Olympic gold medalist backstroke and medley through 1988, 92, 96

1974 – Birth of Shivanarine Chanderpaul. When he made his debut against England in Georgetown in 1993-94, he was the first teenager to play in a Test for West Indies since Elquemedo Willett in 1972-73. His career run graph took a turn upwards from India’s tour in 2006, where he scored seven hundreds and 14 half-centuries averaging 73.09 from 23 Tests in the next three years. Later on, Chanderpaul became a run machine, reaching 10,000 Test runs in his 140th Test, in 2012 against Australia 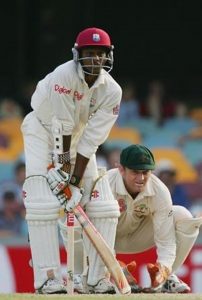 Remember this batting stance, perhaps the oddest of our time. Today is the 47th birthday of Shivanarine Chanderpaul

2003 – The 18-year-old Christiano Ronaldo makes his debut for Manchester United and the Premier League in a 4-0 home victory over Bolton Wanderers. He laid the foundation on a career that is deemed as one of the best ever to grace the game 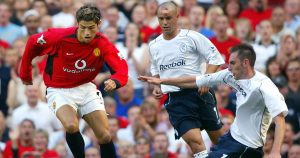 On 16 August 2003, the 18-year-old Christiano Ronaldo made his Man United and the Premier League debut

2014 – After being starved of Test cricket for eight years, India Women upset the English in Wembley. A team with eight debutants rolled England over for 92 on the opening day, and took a slender lead. Jhulan Goswami took four in England’s second innings before half-centuries from Smriti Mandhana and Mithali Raj got India home by six wickets. Raj, who also featured in their famous 2006 win, was there at the end