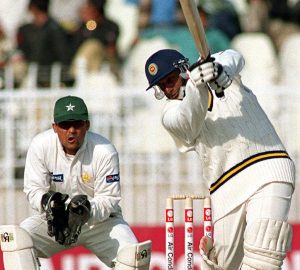 1950 – First major league baseball day game completed under lights (Philadelphia Phillies 6, Boston Braves 5)
1962 – New York Mets win their first game ever, after going 0-9, beat Pittsburgh Pirates 9-1
1983 – The first-ever Test in Kandy. It was also the first between Sri Lanka and Australia. David Hookes scored his maiden Test century in this game. His unbeaten 143 and five-fors from Bruce Yardley and Tom Hogan helped Australia win the match by an innings and 38 runs
1991 – Gordon Greenidge ruined all of Australia’s hopes of dethroning the West Indies as the best team in the world. His brilliant 226 was his fourth Test double-hundred, and it propelled West Indies to a massive 536/9 declared. Australia was well beaten by 343 runs. The series was already won by the Windies with two down with one to play. This was also Greenidge’s last test innings on home soil
1997 – Aravinda De Silva scored a blistering 168 on the final day in the Test against Pakistan in Colombo. It was a special inning because he was struggling in his previous 15 Test innings, but this was the first of six consecutive centuries in Test innings at the various Colombo grounds
2013 – Chris Gayle scored the highest-ever T20 score. His 175 remains at the top along with the records for the fastest century off just 30 deliveries, in the same innings. Gayle dominated from the word go, and he had a 167-run opening stand with Tillakaratne Dilshan, who contributed only 33 to the partnership

August 29, 2019 byRevatha No Comments
He would go on to become the fastest player to 50 ODI wickets, in just 19 games, a record he still holds