1806 – Birth of William Webb Ellis, the English Anglican clergyman and the supposed inventor of rugby football while a pupil at Rugby School. The William Webb Ellis Cup is presented to the winners of the Rugby World Cup 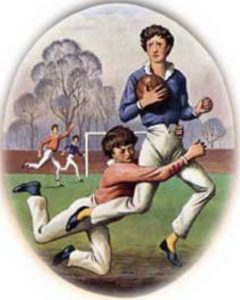 A portrait of William Webb-Ellis carrying the ball during a school association football match played in 1823. According to legend, this action would have created the rugby-style of play

1894 – Birth of English cricketer Herbert Sutcliffe, who became the first person to hit four hundreds in a Test series, including three in a row in Sydney and Melbourne in 1924-25

1939 – Birth of Japanese weightlifter Yoshinobu Miyake, who won one silver and two gold medals at the 1960, 1964, and 1968 Olympics. In 1993, he was inducted into the International Weightlifting Hall of Fame

1955 – Birth of English cricketing legend Sir Ian Terence Botham. His career stats are too lengthy, but most prominent of all will always be his Ashes-winning all-round performance in 1981 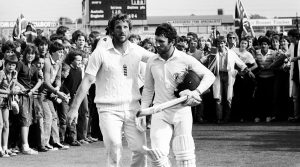 1969 – Birth of Sri Lankan wicket-keeper bat Romesh Kaluwitharana, who revolutionised one-day cricket when he and Sanath Jayasuriya took pinch-hitting to a new level in the mid-1990s. “Little Kalu” was instrumental in Sri Lanka’s most memorable 1996 World Cup triumph 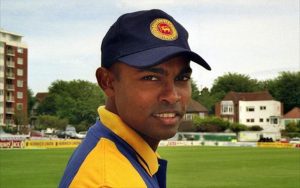 Happy birthday “Little Kalu” and thanks for the great memories!

1989 – Sachin Tendulkar, at 16 years and 214 days, becomes the youngest man to make a Test fifty when he stroked 59 in the second Test between India and Pakistan in Faisalabad

November 16, 2018 byRevatha No Comments
Going into fourth day's play, Saturday, England are leading by 278 runs with 1 wicket in hand in the second cricket Test in Pallekele.

Matara City five points up at the top

Matara City extended the lead at the top with a convincing 2-0 win over New Star SC in the Champions League 2022 organised by Football Federation (FFSL) in Sri Lanka.
Week-11 game