1975 – Sri Lankan wicket-keeper batsman Lanka de Silva was born today. He came into the Sri Lanka team in place of Romesh Kaluwitharana, aged 22. De Silva proved up to the task in hand and, as well as being an excellent ’keeper, he showed a nifty touch with the bat too. But competition for the ’keeper’s place was so tough then and de Silva lost his place when ‘Little Kalu’ returned to the side. Lanka never got another chance since, to represent Sri Lanka 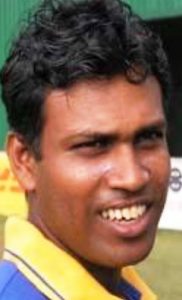 2001 – Hamilton Masakadza became the first black African to score a Test century. Aged just 17 years and 352 days at the start of the match, the second Test against West Indies, Masakadza batted 388 minutes and 316 balls for his 119, with Zimbabwe facing a first-innings deficit of 216. Zimbabwe declared on 563/6, and, had rain not washed out the final day, they might even have squared the series!

2002 – Fast bowler Mataramba Kanaththa Gamage Chamila Premanath Lakshitha alias Chamila Gamage became the first Sri Lankan, and 13th overall, to take a wicket from his first ball in Test cricket when he bowled out Mohammad Ashraful in Colombo. Gamage, a Sri Lanka Air Force recruit, took three wickets in the match and played only one more Test, in the Centurion later that year 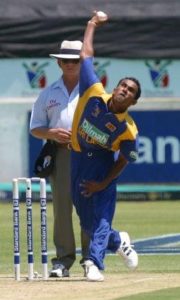 On 29 July 2002, fast bowler Chamila Gamage became the first Sri Lankan to take a wicket from his first ball in Test cricket (Files)

2006 – One of the proudest moments in Sri Lanka’s sports! The biggest Test partnership of all time. Mahela Jayawardene and Kumar Sangakkara beat compatriots’ record when they pounded South Africa into submission with a 624-run stand in Colombo. Sanath Jayasuriya and Roshan Mahanama had shared 576 against India in 1997. The two batted nearly three days – Jayawardene made 374, the second Sri Lankan to get a triple-century, and Sangakkara 287. Muttiah Muralitharan did the rest, taking ten wickets in the match as Sri Lanka won by an innings and 153 runs! 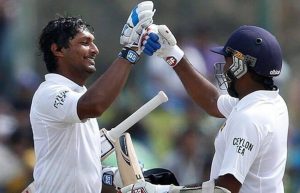 One of the proudest moments in Sri Lanka’s sports! The biggest Test partnership of all time is made by Mahela Jayawardene and Kumar Sangakkara, pounding South Africa into submission with a 624-run stand in Colombo

2018 – India international Smriti Mandhana equalled the record for the fastest fifty in a women’s T20 in a Kia Super League match. She got to the mark off 18 deliveries with five fours and four sixes, equalling Sophie Devine’s record, set for New Zealand against India three years before

August 24, 2018 byRevatha No Comments
China continues to lead the tables as new records set in swimming on Thursday