August 5, 2021 by Revatha No Comments
1961 – Birth of Athula Samarasekara, who kicked off his ODI and Test careers with ducks, yet went on to make an aggressive half-century, coming in at No. 3, in the second innings of his first Test held at Lord’s. The six-footed ‘Big Sam’ played for Sri Lanka during 1983-94, playing in four Tests and 39 ODIs altogether as an aggressive, hard-hitting all-rounder before the emergence of Sanath Jayasuriya. Never being able to fully establish a permanent position in the team, Samarasekera ended his international career by deciding to take up professional cricket in Bangladesh. He presently lives in Melbourne, Australia

1972 – Pace bowler Aaqib Javed was born. He played in his first ODI at 16, made his Test debut at 17, and helped Pakistan beat England in the 1992 World Cup final, in which he conceded only 27 runs in 10 overs and took the prize wickets of Alec Stewart and Neil Fairbrother. His 7/37 against India in Sharjah in 1991-92 was an ODI record at the time

1984 – American Joan Benoit won the first Olympic marathon for women (2:24.52) ahead of Grete Waitz of Norway at the Los Angeles Games

1988 – Birth of Italian swimmer Federica Pellegrini. She holds the world record for 200 m free-style and won a gold medal at the 2008 Beijing Olympics. At the 2009 World Championships in Rome, Pellegrini became the first woman ever to break the four-minute barrier in the 400 m free-style, with a time of 3:59.15 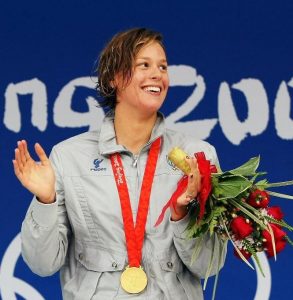 Italy’s Federica Pellegrini is born on 5 August 1988. She became the first woman ever to break the four-minute barrier in the 400 m free-style with a time of 3:59.15

1991 – Birth of Bangladesh off-spinner Sohag Gazi who started his Test career with a nine-wicket haul against West Indies in Dhaka in 2012. A year later in Chittagong, Gazi became the first cricketer to score a hundred and take a hat-trick in a Test. But the elation didn’t last long. In October 2014, Gazi was suspended from bowling after being reported for a suspect action. He modified it and was cleared by the International Cricket Council in February 2015 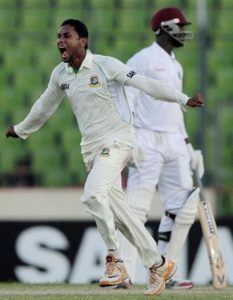 Bangladesh off-spinner Sohag Gazi, born on 5 August 1991, took a match-haul of 9/219 against West Indies in 2012, the best by a Bangladeshi Test debutante

2019 – In the end the boos didn’t make a difference, or perhaps they spurred him on: on his return to Test cricket after a year’s ban for ball-tampering, Steven Smith made two hundreds, taking Australia from 122/8 to a 251-run win at Edgbaston, where England had lost only one Test since 2002. Smith was the fifth Australian to make twin centuries in an Ashes Test. Along with Matthew Wade, Smith set England 398 to chase in a little over a day; it was plenty for Nathan Lyon and Pat Cummins, who wrapped up proceedings shortly after lunch on the final day

Your story needs to be an example for future – Namal