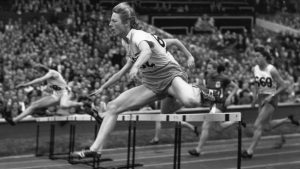 1971 – Happy birthday former Sri Lankan spin bowler Piyal Wijetunge! One of the three schoolboys from St. Anthony’s College, Kandy who played in the same team and then went on to represent Sri Lanka. Wijetunge, a left-arm orthodox slow bowler, formed a menacing partnership with Muttiah Muralitharan, terrorising batsman from other schools. The other member of the trio was Ruwan Kalpage. Wijetunge, though, played only one Test for Sri Lanka 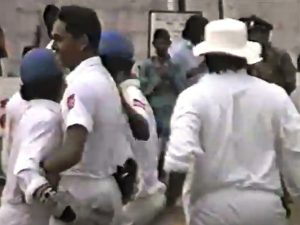 In a memorable personal moment, Piyal Wijetunge (second from left) made his Test debut alongside his former schoolboy team-mates, Muralitharan and Ruwan Kalpage, against South Africa at Moratuwa in August 1993, where he bowled tidily taking two wickets. However, the St. Anthony’s spin trio could not bowl Sri Lanka to victory on the final day as they did many times at school, as a defiant century from Jonty Rhodes held them at bay

1983 – Birth of Dutch footballer Robin Van Persie. Regarded as one of the best strikers in his time, he also was the highest goal scorer for his country

1997 – Sanath Jayasuriya’s date with destiny. He woke on 326 not out, within 50 of the highest score in Test history, against India in Colombo. But he added only 14 before he fell to Rajesh Chauhan for 340. There were a few other records, though, on that bizarre day at Khettarama: Sri Lanka stormed to 952/6, the highest score in Test history, and Jayasuriya and Roshan Mahanama batted throughout two full days’ play. In all, they added 576, a record for any Test wicket, which stood for nine years 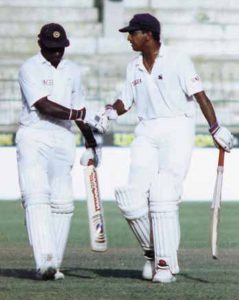 In 1997, on a placid Khettarama wicket, Jayasuriya (on left) and Mahanama batted throughout two full days’ play. In all, they added 576, a record for any Test wicket, which stood for nine years

2011 – Norman Gordon became the first Test cricketer to usher in his 100th birthday. Gordon, a South African fast bowler, played in the famous ‘timeless Test’ in Durban in 1938-39, which lasted ten days before play was called off so that the England team could catch the ship back home. Gordon played all five Tests in that series, his only one, and took 20 wickets. New Zealand’s Eric Tindill was the only other Test cricketer to live past 99 years 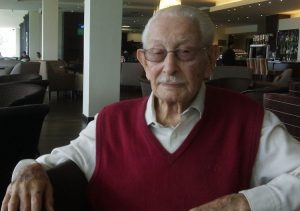 In 2011, South African batsman Norman Gordon, who played Test cricket in the 1930s, became the first Test cricketer to usher in his 100th birthday. He passed away in 2014

2016 – Hoàng Xuân Vinh of Vietnam records 202.5 points to win the gold medal in the men’s 10 m air pistol at the Rio de Janeiro Olympics. It was Vietnam’s first-ever gold medal in any Olympic event

2016 – A 229-run win inside three days in Galle gave Sri Lanka an unassailable 2-0 series lead and their first series win against Australia in 17 years. Australia’s frailties against spin were exposed for the second match in succession. Here they succumbed to Dilruwan Perera, who finished with ten wickets and scored a fifty, and Rangana Herath, who also claimed a hat-trick

Watching action during the ban was tough: Chandimal

August 17, 2018 byRevatha No Comments
Sri Lanka Test captain Dinesh Chandimal says it was tough to watch matches while not playing in them