September 5, 2021 by Revatha No Comments

One of the first things a chess player learns about the endgame is that you can’t checkmate a lone king with either a bishop or a knight, the so-called minor pieces. The rules state that if a player only has a minor piece against the enemy king, the game is declared drawn because it’s a “dead position” – a position where neither player can win by any sequence of legal moves. In other words, it’s a case of “insufficient mating material”.

The curious thing is, a minor piece (along with the king of course) can in fact be ‘sufficient’ to deliver a checkmate. Just that the enemy king needs to have some friendly company. This is one of the more stimulating examples of the material paradox in chess.

Confused? Have a look at the following position. Bear in mind that it’s not a problem to be solved. It’s a position to ponder over. 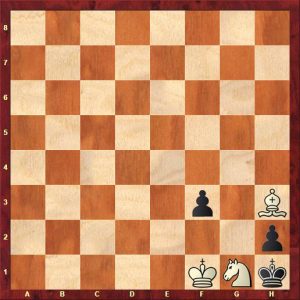 White to play (and contemplate!)

White must play 1.Nxf3 and allow a stalemate. Now take away either the knight or the bishop, and white has a checkmate in two! (Without the bishop – 1.Nh3 f2 2.Nxf2# ;  Without the knight – 1.Bg4 f2 2.Bf3#) Interestingly , had the black king not been saddled with those pawns, those two checkmates would not have been possible.

That’s interesting from the point of view of both the players. To understand the rare occasions when a minor piece ends up being “sufficient”, let’s have a look at some fascinating examples. 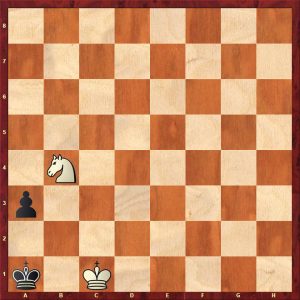 If not for the existence of the black pawn, the game is drawn. But now it is clear that white has “sufficient material” to checkmate because If it’s black’s turn to move, 1…c2 2.Nc2# would happen. How to close the deal if white moves first? 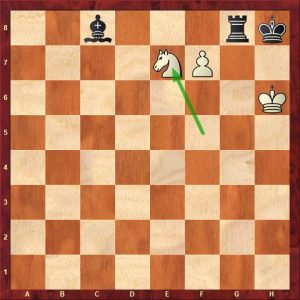 Black can’t move his rook without getting checkmated. So, 1…Be6 is the only move. It seems that white must capture the rook, ending up with insufficient checkmating material, or does he?

When you eliminate the impossible…

The following problem expands on a theme first discovered by the legendary composer Alexey Troitsky. 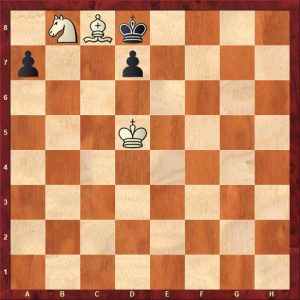 White wins if he manages to capture both the black pawns without losing any of his minor pieces. It’s tricky because the black king is threatening to spoil the party.

Let’s examine white’s options using the method of elimination. 1.Nxd7 drops the bishop, so does any other knight or a king move. This means the bishop must move first. 1.Bb7 and 1.Bxd7 both run into 1…Kc7 attacking both the minor pieces. What remains is 1.Ba6. But hang on, doesn’t 1…Kc7 trap the knight again?

It seems, we have run out of moves.

When less is indeed more

Finally here’s a delightful mate-in-five problem, white has three pieces other than his king. Yet the only way for him to achieve a mate in five is to sacrifice two of them. 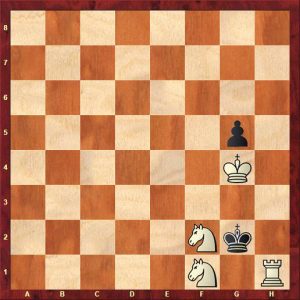 The solution is neat and tidy, as it restricts black to a single possible move every turn.