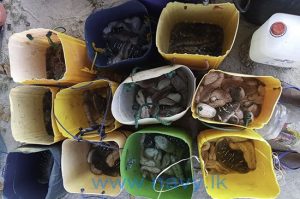 About 10,219 illegally harvested sea cucumbers have been seized by the Navy in operations carried out in Eastern, Northern, Northwestern and North Central Naval Commands during the past two weeks, the Navy said today.

It said a group of suspects and their diving gear were also apprehended.

“Sri Lanka Navy has increased its patrols covering the seas around the island to prevent adverse effects on the marine environment, due to illegal fishing practices by a handful of individuals with scant regard in the island’s waters,” the Navy stated.

Further, 53 individuals, 11 dinghies and diving gear were also taken into naval custody during these patrols.

The Navy arrested 22 persons, seven dinghies and other accessories used by the accused.

November 17, 2020 byNethmi Liyanapathirana No Comments
Labour Minister Nimal Siripala de Silva said private companies, apart from those in the tourism industry, should obtain permission from the Department of Labour.

May 21, 2021 byNews Admin No Comments
The Federal Bureau of Investigations (FBI) of the United States of America and the Australian Federal Police (AFP) are supporting Sri Lanka to investigate the Easter Sunday terror attacks, as per the