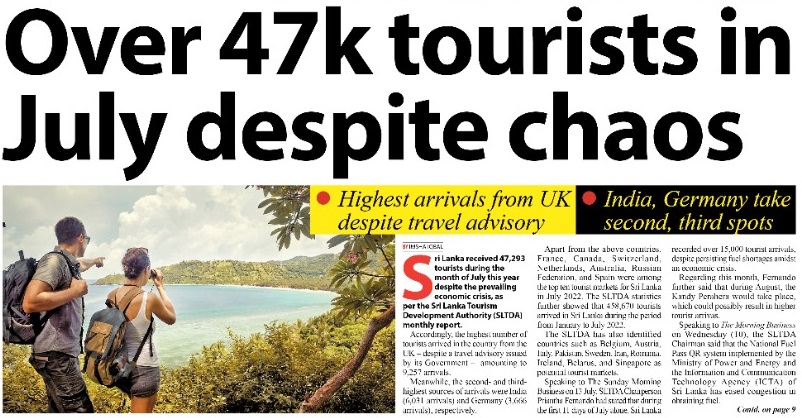 Over 47k tourists in July despite chaos

Sri Lanka received 47,293 tourists during the month of July this year despite the prevailing economic crisis, as per the Sri Lanka Tourism Development Authority (SLTDA) monthly report.

Accordingly, the highest number of tourists arrived in the country from the UK – despite a travel advisory issued by its Government –  amounting to 9,257 arrivals.

Meanwhile, the second- and third-highest sources of arrivals were India (6,031 arrivals) and Germany (3,666 arrivals), respectively.

Apart from the above countries, France, Canada, Switzerland, Netherlands, Australia, Russian Federation, and Spain were among the top ten tourist markets for Sri Lanka in July 2022.

The SLTDA statistics further showed that 458,670 tourists arrived in Sri Lanka during the period from January to July 2022.

Speaking to The Sunday Morning Business on 13 July, SLTDA Chairperson Priantha Fernando had stated that during the first 11 days of July alone, Sri Lanka recorded over 15,000 tourist arrivals, despite persisting fuel shortages amidst an economic crisis.

Regarding this month, Fernando further said that during August, the Kandy Perahera would take place, which could possibly result in higher tourist arrivas.

Speaking to The Morning Business on Wednesday (10), the SLTDA Chairman said that the National Fuel Pass QR system implemented by the Ministry of Power and Energy and the Information and Communication Technology Agency (ICTA) of Sri Lanka has eased congestion in obtaining fuel. However, he noted, the weekly quota of 20 litres of fuel has not proven sufficient for travel and transport agents.

“Therefore, the SLTDA is working with the Sri Lanka Transport Board (SLTB) depots and the Army camps in facilitating registered agents for tourist movements based on confirmed bookings,” added Fernando.

May 9, 2021 byNews Admin No Comments
A few days ago, the Forbes 30 Under 30 list under the category of media, marketing, and advertising featured two Sri Lankans, namely Surge Global Founder and Chief Growth Officer Bhanuka Harischandra,

July 8, 2019 bythemorninglk No Comments
ManKiwwa is one of the latest apps to hit the Sri Lankan market and is one of the few apps that help society move forward as a whole.