Decision on Mattala this week 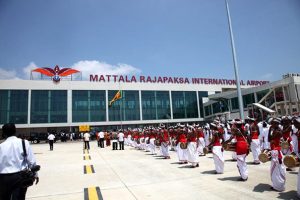 The Cabinet is expected to take a decision on whether to handover the operations of the Mattala Rajapaksa International Airport (MRIA) to the Airports Authority of India (AAI) this week.


The Sunday Morning learnt that a proposal seeking Cabinet approval was to be submitted in this regard at this week’s Cabinet meeting.

The Government was in the process of finalising the deal to hand over the loss-making airport to India since last year, but the talks later stalled.

The airport was officially opened in March, 2013 but has been operating at a loss ever since.

Fly Dubai was the last airline to operate commercial flights to MRIA but last year, it terminated its operations to the facility built at a cost of $ 210 million by the previous regime.

March 19, 2022 byNews Admin No Comments
The Finance Ministry’s imposition of a special commodity levy on nine imports for the next six months is likely to exacerbate the downward economic trend of an already hard-hit hospitality sector, sta