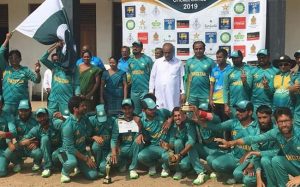 The Pakistan blind cricket team, which is on a tour of Sri Lanka, has been stranded in the island nation due to the closure of Lahore airport in the wake of escalating tension with India.

“They have been forced to stay longer and also have to pay additional expenditure,” Chaminda Pushpakumara, the manager of the local blind cricket team said.

“They had already incurred personal expenditure to travel to Sri Lanka,” Pushpakumara added.

The official has sought the Sri Lankan government’s intervention to provide the Pakistani team with assistance.

After border tensions broke out between India and Pakistan last week, the Sri Lankan Airlines cancelled all its flights to Lahore.

The Pakistan government then closed its airspace for domestic and international flights because of the situation, which forced the 24-member Pakistan team to postpone its departure.