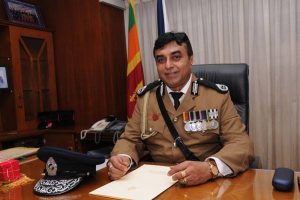 Parliament is to discuss the controversy over the IGP when it meets this Tuesday (7), The Sunday Morning learnt.

A senior Cabinet Minister told The Sunday Morning that IGP Pujith Jayasundara had been sent on compulsory leave by President Maithripala Sirisena without a charge sheet.

According to the Senior Cabinet Minister, the proper procedure is to issue a charge sheet when sending a high ranking official on compulsory leave.

IGP Pujith Jayasundara was placed on compulsory leave after refusing to tender his resignation upon President Maithripala Sirisena’s request, following the lapse in national security which led to the Easter Sunday Attacks of 21 April.

Questions have been raised regarding the powers that are vested to President Sirisena to forcibly remove the IGP from his post. An acting IGP has been appointed while IGP Jayasundra was sent on leave.

August 20, 2021 byNews Admin No Comments
The Samagi Jana Balawegaya (SJB) has requested the public to support the black flag protest organised by the Catholic church, which to be held tomorrow (21) over what the Catholic church calls the con