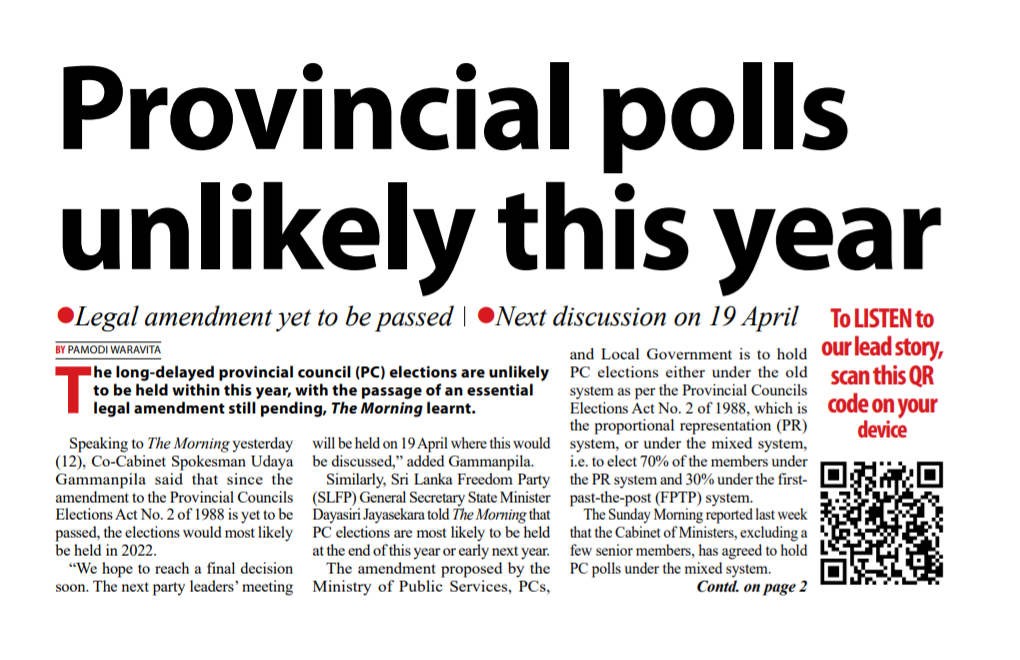 The long-delayed provincial council (PC) elections are unlikely to be held within this year, with the passage of an essential legal amendment still pending, The Morning learnt.

Speaking to The Morning yesterday (12), Co-Cabinet Spokesman Udaya Gammanpila said that since the amendment to the Provincial Councils Elections Act No. 2 of 1988 is yet to be passed, the elections would most likely be held in 2022.

“We hope to reach a final decision soon. The next party leaders’ meeting will be held on 19 April where this would be discussed,” added Gammanpila.

Similarly, Sri Lanka Freedom Party (SLFP) General Secretary State Minister Dayasiri Jayasekara told The Morning that PC elections are most likely to be held at the end of this year or early next year.

The amendment proposed by the Ministry of Public Services, PCs, and Local Government is to hold PC elections either under the old system as per the Provincial Councils Elections Act No. 2 of 1988, which is the proportional representation (PR) system, or under the mixed system, i.e. to elect 70% of the members under the PR system and 30% under the first-past-the-post (FPTP) system.

The Sunday Morning reported last week that the Cabinet of Ministers, excluding a few senior members, has agreed to hold PC polls under the mixed system.

Currently, the terms of all nine PCs have expired and are presently functioning under the administration of the provincial governors.

December 26, 2021 byAazam Ameen No Comments
Although Sri Lanka seems to be making policy decisions and enacting laws to reduce the use and production of single-use plastic and polythene, the Covid-19 pandemic has hampered these efforts.

What was Dravid’s secret to Dasun Shanaka?

State-owned hospitality ventures to be restructured