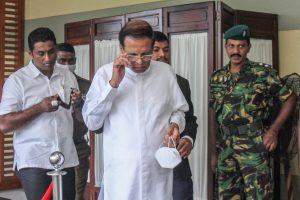 The Presidential Commission of Inquiry (PCoI) on Easter Attacks has recommended the Attorney General to consider criminal proceedings against former President Maithripala Sirisena, former IGP Pujith Jayasundera and several others over their failure to prevent the attacks.

According to excerpts of the report released by MP Harin Fernando, the PCoI said that President Sirisena has proceeded to India and then Singapore from 16 to 21 April , 2019 without making any acting appointment for the post of Minister of Defence in spite of knowledge he possessed of possible threat from IS or Zaharan Hashim.

“The President should have made an acting appointment. The CoI, based on the evidence, is of the view that there is criminal liability on his part for acts or omissions explained above. The CoI recommends that the AG consider criminal proceedings against President Sirisena under any suitable provision in the penal code,” it said.

It further said that President Sirisena has not convened the National Security Council (NSC) properly.

The Commission also said former IGP Pujith Jayasundera has failed to take effective and decisive action to prevent the attacks or incidents leading to the bombings.

“Based on the evidence, the CoI is of the view that there is criminal liability on his part for the acts or omissions . The CoI recommends that the AG consider instituting criminal proceedings against  Jayasundera under the Penal Code,” it said.

It also recommended the AG to consider instituting criminal proceedings against Nandana Munasinghe and Nilantha Jayawardane.

Meanwhile, the PCoI said former Prime Minister Ranil Wickremesinghe has not been invited by the President to NSC Meetings.

“However, it was incumbent on the PM to have raised this in parliament or at the Cabinet in order to ensure that the status quo is restored. The failure on the part of the PM to do so and after the Easter attack take up the position that he was not invited in unacceptable,” it said.

December 5, 2020 byLahiru Pothmulla No Comments
The number of recovered COVID-19 patients increased to 20,090, the Epidemiology Unit at the Health Ministry said today.

June 18, 2020 byTSM Web Desk No Comments
The Health Ministry is yet to gazette the Covid-19-related health guidelines issued to the general public and for the parliamentary election under the Quarantine and Prevention of Diseases Act so as t

India and Japan to develop WCT