August 27, 2020 by themorningeditor1 liberty No Comments 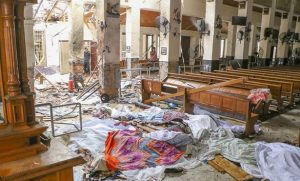 A witness giving evidence before the Presidential Commission of Inquiry (PCoI) probing the Easter Sunday attacks has said that 347 files containing intelligence had been submitted to senior officials since 2015.

Former State Intelligence Service (SIS) Director Senior Deputy Inspector General (DIG) Nilantha Jayawardena, giving evidence before the PCoI on Tuesday (25), has said that despite being informed of the intelligence gathered on Zahran, who masterminded the Easter Sunday attacks, none of the senior officials had informed him of further action that would be taken based on the information.

“No senior official had requested for further information based on the intelligence reports submitted since 2015. Only the IGP (Inspector General of Police) requested for two or three further reports from time to time. No senior official requested for further information on the reports sent on the pre-attack intelligence that was gathered. If there’s any evidence to prove that there has been any communication based on the reports submitted, I’m willing to resign immediately,” Jayawardena has said.

“Despite pre-attack information being submitted, some people closed their offices and re-opened only after the attack. Some people left for overseas despite the information that was submitted. Some people stayed at home and slept, while some others avoided going to church that day. Finally, everyone is asking me why I didn’t give prior notice,” the former SIS Chief has noted.

“I did what I had to do. I informed the Defence Secretary, Head of the National Intelligence Bureau, and the IGP. I also tried to inform the President. It is not my fault that the telephone calls were not answered,” he has added.

April 19, 2022 byAazam Ameen No Comments
Inspector General of Police (IGP) C. D. Wickramaratne says that during the Rambukkana protest, police had to resort to "minimum force" to prevent a group from trying to set fire to a bowser with 30,00