PCoI on political victimisation: Kangaroo court to whitewash crimes or restore due process?

February 5, 2021 by Sumudu Chamara No Comments 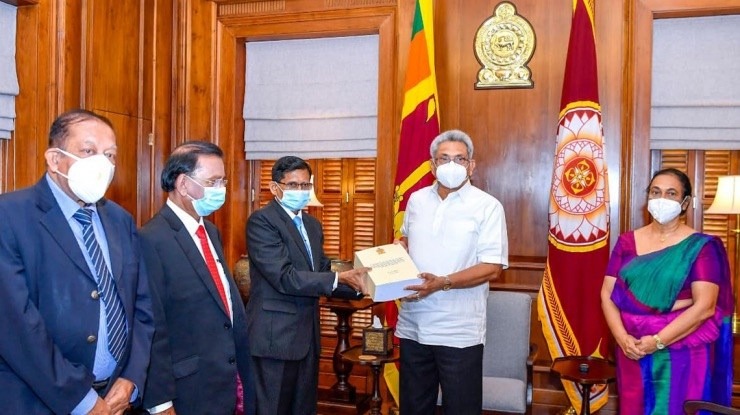 The final report of the Presidential Commission of Inquiry (PCoI) probing incidents of political victimisation is one of the most discussed topics in the political arena these days. The PCoI appointed to look into alleged incidents of political victimisation in State institutions, particularly law enforcement agencies, during the tenure of the former United National Front (UNF)-led Government recently released its 2,000-page report, sparking heated debates among those who were, within the pages of the report, exonerated from the charges against them and those who were found guilty of politically victimising them, again with the context of the report’s recommendations.

On the one hand, a myriad of allegations are being levelled against the legality of the PCoI, its recommendations, composition, and proceedings, while on the other hand, the Government maintains that the PCoI has served its purpose by identifying those who were politically victimised and those responsible for such incidents, and that it is ready to implement its recommendations through a Special PCoI.

What is the PCoI probing incidents of political victimisation?

The PCoI was appointed by President Gotabaya Rajapaksa through the Extraordinary Gazette No. 2157/44, dated 9 January 2020, to look into incidents of political victimisation that are said to have taken place in several State institutions between 8 January 2015 and 16 November 2019 – the tenure of the UNF “Yahapalana” (good governance) Government.

The gazette, while vesting the PCoI with powers to make recommendations concerning its inquiries, required the PCoI to look into whether there had been any instances of malpractice, irregularities, or non-compliances with the proper procedures in relation to the administration of three top State institutions – the Commission to Investigate Allegations of Bribery or Corruption (CIABOC), the Financial Crimes Investigation Division (FCID), and the Special Investigations Unit (SIU) of the Police.

The PCoI was also required to look into whether any investigations conducted by the said three institutions had been influenced, obstructed, or prevented in any manner, and also whether any officer entrusted with the conduct of investigations by these institutions had acted under undue influence by third parties including the Anti-Corruption Unit. In addition, the President, through the same gazette, ordered the PCoI to inquire as to whether any person had committed any act of political victimisation, misuse or abuse of power, and/or corruption and fraudulence in relation to the functions of the Anti-Corruption Unit; the CIABOC, the FCID, or the SIU; or the administration of any law or the administration of justice.

Later, in another Extraordinary Gazette No. 2159/16, dated 22 January 2020, the President said that inquiries should be made into the Criminal Investigation Department (CID) in addition to the CIABOC, the FCID, and the SIU. The term of the PCoI, which was to submit its final report within six months of its appointment, was extended on two occasions – on 8 July 2020 and 9 November 2020 – until 25 November 2020.

Also through this gazette, the President vested powers with the Commission “to ascertain all complaints the investigation of which was first allegedly decided upon by the Investigation Unit referred to in the warrant and thereafter investigation thereon initiated, and those complaints made in relation to officers of the tri-forces and the Police that affect the national security, and in the case of inquiries, investigations, and legal proceedings held causing prejudice to some person in the administration of laws or administration of justice due to pressure being exerted by a third party, and in the case of inquiries, investigations, and legal proceedings held in relation to the tri-forces, the Police, and the public service affecting the national security, and/or where prejudice was deemed to have been caused in any manner whatsoever, and to take immediate necessary measures to prevent prejudice being caused and national security and the public service being adversely affected”.

Following the establishment of the PCoI, as well as after the issuance of its final report, many parties raised concerns over its legality, proceedings, and most importantly, its recommendations.

The Morning spoke to former Bar Association of Sri Lanka (BASL) President and incumbent Senior Legal Advisor to the Ministry of Justice U.R. De Silva PC in a bid to obtain a clarification about the legality concerning the establishment of the PCoI.

He said that even though certain parties level allegations against and question the constitutionality and the legality of the PCoI, the President has the power to appoint such PCoIs as well as to direct the relevant law enforcement authorities to institute legal action for the implementation of the PCoI’s recommendations.

The PCoI’s recommendations attracted widespread attention as a number of individuals who have been named as respondents in the complaints filed at and inquired by the PCoI were complainants before various other law enforcement agencies against the complainants of the PCoI.

Speaking on the proceedings of the PCoI, Dissanayake alleged that the PCoI, which received 1,971 complaints, had concluded the hearing of 150 complaints within around 300 days and that this timeframe raises concerns. “The Commission’s objective was to release 79 persons and to take legal action against those who filed cases against them.”

He also raised concerns as to whether legal action taken against certain persons based on investigation files received by the Attorney General’s (AG) Department or complaints received by the Police would be withdrawn in accordance with the recommendations of the PCoI report. He further stated that if the Government needs to take action against the violation of the Constitution, which is the allegation levelled against him, the abrupt appointment of a prime minister and ministers in October 2018 by former President and incumbent MP Maithripala Sirisena should also receive the Government’s attention.

De Silva pointed out that the PCoI cannot institute legal action against those found guilty during its proceedings, and can only issue recommendations as it deems appropriate. “Also, the PCoI’s recommendations can be referred to the relevant institutions, and if there is a need, it is also possible to reinstate those who lost jobs unfairly in their jobs,” De Silva pointed out.

After the establishment of the PCoI, the Centre for Policy Alternatives (CPA), a non-governmental organisation (NGO) that focuses predominantly on policy reforms, good governance, and justice-related matters, filed a fundamental rights (FR) petition in the Supreme Court, challenging these newly granted powers.

“These far-reaching and broad powers granted to the PCoI are beyond the scope of the powers that can be legally granted to a CoI as provided by the law. If left unchallenged, these powers would enable the PCoI to make orders which prevent, impede, and/or otherwise prejudice ‘inquiries, investigations, and legal proceedings’ which are ongoing, or which could commence during the mandate of the PCoI. The powers granted by Gazette No. 2159/16 of 22 January 2020 to the PCoI would operate outside the established legal structures and would cause serious prejudice to victims of crimes, and could potentially further delay cases which have been ongoing for several years,” the CPA stated.

CPA Executive Director Dr. Paikiasothy Saravanamuttu told The Morning that the FR petition filed by the CPA has not concluded and is still being heard.

When queried as to how the PCoI’s final report and its recommendations, if implemented, can affect Sri Lanka at the international level, including at the forthcoming United Nations Human Rights Council (UNHRC) session, Dr. Saravanamuttu stressed that the UN High Commissioner for Human Rights has alluded to it in her report and that it might affect Sri Lanka.

He said the final report of the PCoI is tantamount to Sri Lanka going back to the era where people are being falsely accused and their civic rights are being taken away, and that it is a great threat to the country’s democratic institutions.

“The whole point of the PCoI (on political victimisation) is to frame people who have been alleged to have committed violations and they (the PCoI) are instead taking action against the petitioners, including the possibility of their civic rights being deprived. It is encroaching upon the independence and integrity of the Judiciary as well as other democratic institutions. We are going down the wrong path entirely,” he said.

Even through The Morning tried to contact M.A. Sumanthiran of the Tamil National Alliance (TNA), who was identified by the PCoI as a respondent, to obtain his comments, he was not reachable by the time of going to print.

Earlier, Sumanthiran, who was issued summons by the PCoI as a respondent to a complaint, told The Morning that since the PCoI’s report had absolutely no foundation, it was not something that had any standing. He added that although he had applied for the relevant PCoI proceedings, he had not received such, further stating that he was planning to take necessary action.

A large part of a country’s democracy depends on how well it enforces its rule of law, and when it comes to the implementation of the law, it is of great importance that all persons are treated equally. The PCoI, in its report, identifies victims as well as respondents of incidents allegedly involving political victimisation, and its recommendations are yet to be implemented.

However, to the common man, it is still a puzzle as to who the perpetrators are and who the victims are. In the meantime, the intensifying political debates on the same raise concerns among the public over what will happen to the ongoing court cases against those who were identified by the PCoI as political victims. On the other hand, politicians and high-ranking officials abusing their power, sometimes to oppress officials and sometimes the common man, has become a burden to the public.

The public would, therefore, concur with the fact that political victimisation should not take place at all, at any level. The public is now awaiting justice for those who actually faced injustice and proper punishments for the culprits, because at the end of the day, the main priority of any commission ought to be none other than fulfilling the interests of the public.