PCR testing : A costly affair for many

With the increasing number of Covid-19-positive cases reported within the country, concerns have now risen over the varying prices of PCR tests offered by private hospitals accredited by the Ministry of Health.

In parallel to the increasing number of positive cases, the demand for tests has also increased. Some factories approved by the Board of Investments (BOI) were already instructed by the authorities to conduct PCR tests for their employees from private hospitals. 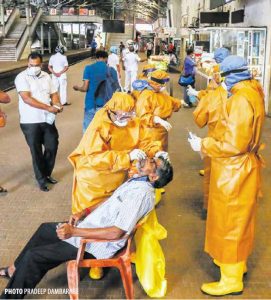 Since testing is vital to eradicate the spread of the virus in society, and with the limited facilities and resources available with the Government, questions are also raised over the affordability of a PCR test from a government-accredited private laboratory.

However, the Ministry also issued guidelines that capped the cost of sample testing by private labs at Rs. 6,000, which is yet to be gazetted. Although the price was decided after discussing with private hospitals, it had been a mere verbal agreement.

As learnt by The Sunday Morning, the price of a PCR test in different private hospitals approximately varies between Rs. 6,500 and Rs. 8,800.

The main reason for these varying prices was due to adding the cost for other services (i.e. transport, etc.) in addition to the test they provide for the patient, it is learnt.

When contacted by The Sunday Morning, Association of Private Hospitals and Nursing Homes (APHNH) President Dr. Lakith Peiris said the reason for the cost variation was mainly due to the variations in the operational costs in each private hospital.

“If you have a large-capacity machine and you want to generate reports quickly but you don’t feed the machine with its full capacity, then the operating cost naturally goes up. For example, if the machine can do 300 in one go and there are only 50 samples, the operating cost will be more. That can be one reason,” Dr. Peiris noted.

When asked whether the prices can be reduced, he noted that the Government could request from private hospitals and see the possibility of reducing the price.

He said that everybody knows the country should conduct more tests but the Government did not have the capacity.

“That is one reason why the Government has recommended some private sector companies to get the tests done from private hospitals,” he stressed.

Explaining further, Dr. Pieris said that imposing a cap of Rs. 6,000 per test was not a scientifically decided price but a request made by the Government. He however stressed that the cost per test is high when considering all the factors taken into account, including the payments for the consultants and human resources.

Initially, testing was intended to be diagnostic and confirm infections in people with symptoms such as cough, fever, shortness of breath, and fatigue. At that time, there was no understanding of the risk of silent transmission within the community via infected people who had not yet developed symptoms or who never developed them, it is learnt.

According to Stat, a US-based media organisation, given that diagnostic focus, the coronavirus testing capacity emphasised the use of highly sensitive PCR tests that rely on amplifying DNA copies of the RNA in SARS-CoV-2, the virus that causes Covid-19.

As per international media reports, in the US, while the antibodies test cost about $ 50, the PCR swab test typically costs between $ 100 and $ 200, which adds up when scaling to hundreds of millions of tests.

When contacted by The Sunday Morning, Ministry of Health Spokesman Dr. Jayaruwan Bandara said the reason for the varying prices was due to the services provided by the respective hospital to their patients, which includes providing personal protection equipment (PPEs). However, he said that generally, as per government regulations, the price per PCR test was Rs. 6,000.

Commenting on the various tests that can be applied, Dr. Banadara said that discussions are ongoing, seeking the possibilities of using antibody tests for Covid-19.

Meanwhile, more concerns have been raised last week in Parliament over the request made by the BOI, urging factory owners to direct their employees to get the PCR test done from private hospitals.

These concerns were raised by Samagi Jana Balawegaya (SJB) MP S.M. Marikkar over the inability of government hospitals to conduct PCR tests, stressing that the factory owners would have to bear the PCR test cost that would amount to millions of rupees.

Marikkar further noted that taking into consideration the situation already faced by factory owners due to the Covid-19 pandemic-related financial slumps, factory owners would be further hampered by the decision taken by the BOI.

In its response to the increasing demand for PCR tests in private hospitals, Sri Lanka Association of Government Medical Laboratory Technologists (SLGMLT) President Ravi Kumudesh stressed that the Ministry of Health had not discussed with the MLTs who conducted the tests whether there was a possibility of conducting such a large number of tests.

“We can conduct more than 4,000 tests per day, and conducting tests for factory employees will not be a problem for government laboratories,” he said, adding that there were issues regarding the tests conducted by the private hospitals, as there was nobody to take responsibility.

“In the recent incident, government laboratories had not conducted tests on Brandix employees who are now said to have arrived from India. So, there is an issue. Who will take the responsibility?” Kumudesh questioned.

He also noted that the PCR test is not the only testing method that can be applied to confirm the Covid-19 virus, but that there are several testing methods which are easy to conduct. The Ministry of Health had made the PCR test compulsory prior to even looking at other options, he added.

Tests according to WHO

In April, the World Health Organisation (WHO) listed the first two diagnostic tests for emergency use during the Covid-19 pandemic. The move should help increase access to quality-assured, accurate tests for the disease. It also means the tests can now be supplied by the United Nations (UN) and other procurement agencies supporting the Covid-19 response.

In vitro diagnostics, the tests carried out are genesig® Real-Time PCR COVID-19 and cobas® SARS-CoV-2 Test for use on the cobas® 6800/8800 Systems.

The emergency use listing procedure (EUL) was established to expedite the availability of diagnostics needed in public health emergency situations. It is intended to help procurement agencies and countries navigate the large presence of different devices on the market and, by assessing them, provide assurance of the products’ quality and performance.

Genesig® Real-Time PCR COVID-19 is an open system more suitable for laboratories with moderate sample testing capacity, while the cobas® SARS-CoV-2 Test for use on the cobas® 6800/8800 systems is a closed system assay for larger laboratories.

September 1, 2019 byThe Sunday Morning No Comments
International Day of the Victims of Enforced Disappearances is annually marked on 30 August.

September 29, 2019 byThe Sunday Morning No Comments
A sharp rise was recorded in Non-Performing Loans (NPL), a sum of borrowed money upon which the debtor has not made scheduled payments for a specified period,