November 12, 2018 by themorninglk No Comments 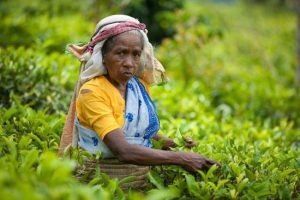 While some newly-appointed ministers have insisted that talks to reach an agreement with plantation companies to pay Rs. 1,000 to estate workers have been “successful”, plantation companies continue to stand their ground saying they cannot afford to pay so much and are pushing for a productivity-based wage model.

State Minister of Plantation Industries Suresh Vadivel told The Sunday Morning that discussions were held with the Treasury Secretary last week on the instructions of Prime Minister Mahinda Rajapaksa.

He said the Treasury Secretary is also having talks with the Regional Plantation Companies (RPCs) to reach an agreement.

“The discussions so far have been successful. We are waiting for the date to sign the collective agreement,” he said.

However, RPCs say they cannot afford to pay Rs. 1,000 and need tax concessions if they are to even consider Rs. 1,000.

The Ceylon Planters’ Society, which represents the planters, said that the situation, as is stands, is a no-win situation.

Secretary General of the Ceylon Planters’ Society Malcolm Dias told The Sunday Morning that unless the Government intervenes and provides some sort of assistance, the matter cannot be resolved.
Dias said that the Government can offer some form of tax concessions to the plantation companies to reduce the burden on them in order for them to consider Rs. 1,000 for the plantation workers.

“I don’t think Regional Plantation Companies can afford it right now. One way to solve this is if this is connected to productivity. But the unions are refusing to agree,” he said.

Hayleys Plantations Managing Director Roshan Rajadurai told The Sunday Morning that the issue plantation companies have is that they can only pay wages from the revenue they make.

He said that the cost of production has always been higher than the revenue and in such a situation paying more to the workers than what the company makes is not possible.

Minister Vadivel however says the companies are making profits and they can afford Rs. 1,000 and that the Government will push for it.

Industry on the brink

The Planters’ Association of Ceylon (PA) says its membership is not financially able to afford demands made by worker trade unions for a daily wage of Rs. 1,000 and strongly cautioned stakeholders that any increase above the Rs. 940 wage proposed by RPCs would place the continuity of the industry in serious jeopardy.

Negotiations over a new collective agreement have reached a complete deadlock despite the industry having made three concrete offers, each of which has been rejected by the trade unions who demand Rs. 1,000 per day plus EPF/ETF regardless of productivity, noted the Association.

“We all want to find a way to maximise the earning potential among estate-sector workers but all stakeholders have to understand the criticality of the current circumstances and understand the long-term sustainability of the industry which millions of livelihoods depend on. On this we stand firm and we urge the Trade Unions to come to a common understanding on this basic fact,” PA Chairman Sunil Poholiyadde stated.

Under the previous collective agreement, workers were provided a basic salary of Rs. 500, in addition to an attendance inventive (AI) of Rs. 60, a Productivity Incentive (PI) of Rs. 140, and a Price Share Supplement (PSS) of Rs. 30, as well as EPF/ETF of Rs. 75, amounting to a total daily wage of Rs. 805.
Some Regional Plantation Companies have already launched a revenue share model as a pilot project to resolve the issue and they say it has resulted in workers earning as much as Rs. 80,000 per month in addition to their daily wages.

The revenue share model is carried out on abandoned tea lands – which got neglected due to the shortage of workers. With a 50% workforce that pluck leaves to rule (maximum 18 kg per day as ordained by their Thalaivar/union leader), much of the estate remains unplucked. This has caused tea land to become jungle, and it was these lands that were given to estate workers on a revenue-share model where the worker and his family are assigned a certain area and set number of tea bushes which they tend and manage after hours.

It is the revenue from these lands that has allowed the worker to earn even as much as a Rs. 100,000 per month on some fields during high cropping months.

The revenue-share model is beyond their daily wage and the workers themselves have requested that they be given the fields to manage.

Workers are offered the usual 25 days work plus the opportunity of working on these abandoned fields for which RPCs pay an enhanced rate for leaves in those areas. This is the model which RPCs say will be a win-win in the long run for both the grower plus the worker.

This model was discussed and recorded in the last collective agreement signed by trade union leaders and EFC.

In the new wage proposals, RPCs have offered an option whereby they pay Rs. 46 per kg of plucked leaf, moving from a fixed wage to the productivity wage. If a worker plucks 22 kg, she/he can earn easily over Rs. 1,000 per day. Additionally they will get Rs. 600 per month as gratuity.

This amount excludes that of housing, water, and other amenities which are given to a worker.
Rajadurai said that if the authorities have a better model in mind they must show how it would work.
He said that several state-owned plantation companies have been suffering and have even been forced to shut down.

Rajadurai said that private companies must also not be pushed to its grave as that would seriously affect the livelihood of the plantation workers.

Plantation companies noted that in 1992 there were 327,000 workers, and today there are just 160,000. They say retention of workers poses a huge problem and the revenue-share model is the best way to turn the workers to agri-entrepreneurs.

“RPCs are not denying a wage increase; however, there must be consideration for financial viability. Meanwhile, current market dictates and prices at the Colombo auctions have shown a downward trend. Raising productivity is an absolute must which the trade unions accepted at the last negotiations with the inclusion of a productivity incentive in the wage package. Therefore, it is essential that the wage is linked to productivity in order to ensure the sustainability of the industry and the national economy as a whole. We should collectively work towards the long-term sustainability of the industry,” Poholiyadde said.

The Planters Association said that the current plucking average in Sri Lanka is 18 kg with harvesters working for approximately 40% of an eight-hour day in the field, and where men typically work for only four hours per day.

Even then, more than 80% of RPC workers receive the Performance Incentive (PI) on their daily norm. In companies that have offered cash plucking on such a basis, the PA stated that the 15-20 kg norm was achieved in just two hours.

Rajadurai said that despite all the hardships faced by private plantation companies, they were already doing more for the workers to ensure they live a decent life.

He warned that pushing companies to pay what they cannot pay will result in a collapse of the industry as a whole.

Life after Covid-19: The road to recovery

August 29, 2021 byNews Admin No Comments
As the pandemic continues, the World Health Organisation (WHO) reports over 211 million of confirmed Covid-19 cases and 4.4 million deaths across the globe, at the time of writing. According to the of