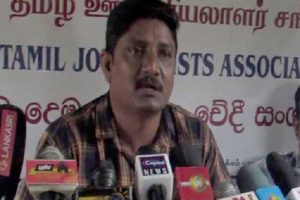 A group of former LTTE members have formed a new alliance and hope to contest the upcoming parliamentary election.

The Crusaders for Democracy led by Ganeshalingam Chandralingam alias Thulasi and at least four other groups consisting of mostly former LTTE members, have joined hands and formed the new alliance.

Thulasi told The Sunday Morning that talks to form the new alliance had begun two years ago.

He said that following the 16 November presidential election, a decision was taken to expedite the process to form the new alliance.

Thulasi said that the new alliance will look to work with President Gotabaya Rajapaksa to address issues faced by the Tamils.

He said that a 14-member leadership council had now been appointed to decide on the name of the new alliance and to draft its party policies.

“We felt that the Tamil National Alliance (TNA) had failed to address Tamil issues over the past few years, so we decided to step in,” Thulasi said.

He said that the intention of the new alliance was to seek a solution for the Tamil issues amicably instead of adopting a confrontational approach.

September 19, 2019 byTSM Web Desk No Comments
Postal vote applications will be accepted from today(19) until 30 September the Elections Commission announced.