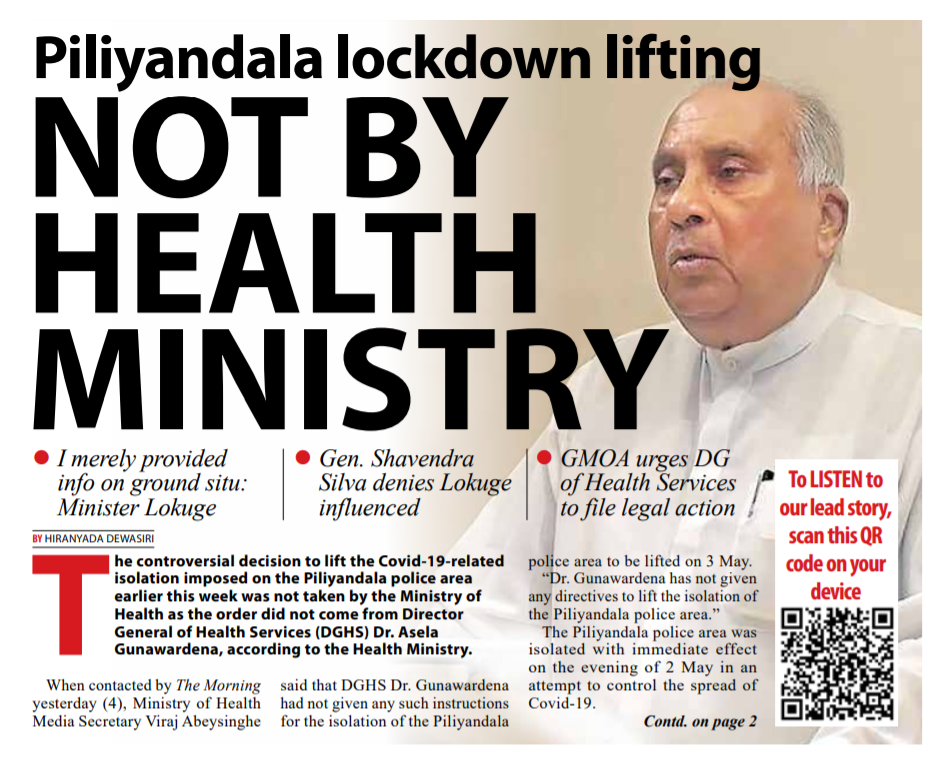 The controversial decision to lift the Covid-19-related isolation imposed on the Piliyandala police area earlier this week was not taken by the Ministry of Health as the order did not come from Director General of Health Services (DGHS) Dr. Asela Gunawardena, according to the Health Ministry.


It was reported later that the request of Kesbewa Medical Officer of Health Dr. Samanthika Wijesundara was to lock down the entire Piliyandala area and that she was not informed of the move to lift the imposed blanket isolation.


Following these reports, it was revealed that Minister of Transport Gamini Lokuge had informed the authorities that the isolation imposed on the entire Piliyandala police area could be lifted. It was reported that Minister Lokuge had claimed that according to intelligence reports, there was no requirement to place the entire area under isolation.


When inquired by The Morning yesterday, Minister Lokuge said that he has no power to lift the isolation and that he had merely provided information to the authorities on the situation.


“I have no power to lift a lockdown. I merely informed the authorities about the situation. If they lifted the lockdown, what I told them must have been correct.”


When questioned as to whether the isolation of the Piliyandala police area was lifted following a request by Minister Lokuge, National Operations Centre for the Prevention of the Covid-19 Outbreak (NOCPCO) Head and Army Commander Gen. Shavendra Silva denied it and said that it was a decision arrived at after consulting a group of specialists and the persons in charge.


“We do not follow the orders of individuals as all our decisions are made collectively. The decision to lift the isolation of Piliyandala was taken after discussions and consultations with the health sector and the relevant parties. We always consult the health sector.”


Gen. Silva further said that the health sector makes recommendations and that the NOCPCO makes the decisions accordingly.


When inquired as to whether an investigation is to be carried out on the lifting of the isolation imposed in Piliyandala, State Minister for Primary Healthcare, Epidemics, and Covid Disease Control Dr. Sudarshini Fernandopulle said that such an action has to come from DGHS Dr. Gunawardena.


“DGHS Dr. Gunawardena has the power to impose and lift lockdowns, so any investigation should come from him. As of now, I am not aware of any such measures.”


Meanwhile, addressing the press, the Government Medical Officers’ Association (GMOA) said that DGHS Dr. Gunawardena should take legal action against the lifting of the isolation.


“If anyone, including any politician from any party, is obstructing the efforts to control the spread of Covid-19 in the country, DGHS Dr. Gunawardena should take legal action against them. It is a serious issue if any politician is instructing such decisions to be changed.”


They said that incidents such as these are setting a bad precedent for the control of Covid-19 in the country.


Speaking about this yesterday in Parliament, Janatha Vimukthi Peramuna-led National People’s Power (NPP) Parliamentarian Vijitha Herath questioned as to whether decisions regarding the country’s Covid-19 pandemic situation are made by medical consultants, politicians, or another force that is above them.

May 13, 2019 bythemorninglk No Comments
A group of senior academics representing the agribusiness centre of the agriculture faculty of the University of Peradeniya paid a visit to the Directorate of Agribusiness Development of the Tamil Nad

July 1, 2020 byTSM Web Desk No Comments
The counting of ballot papers for the 2020 general election will commence at 8 a.m. on 6 August, following the polling date, the Election Commission (EC) said.