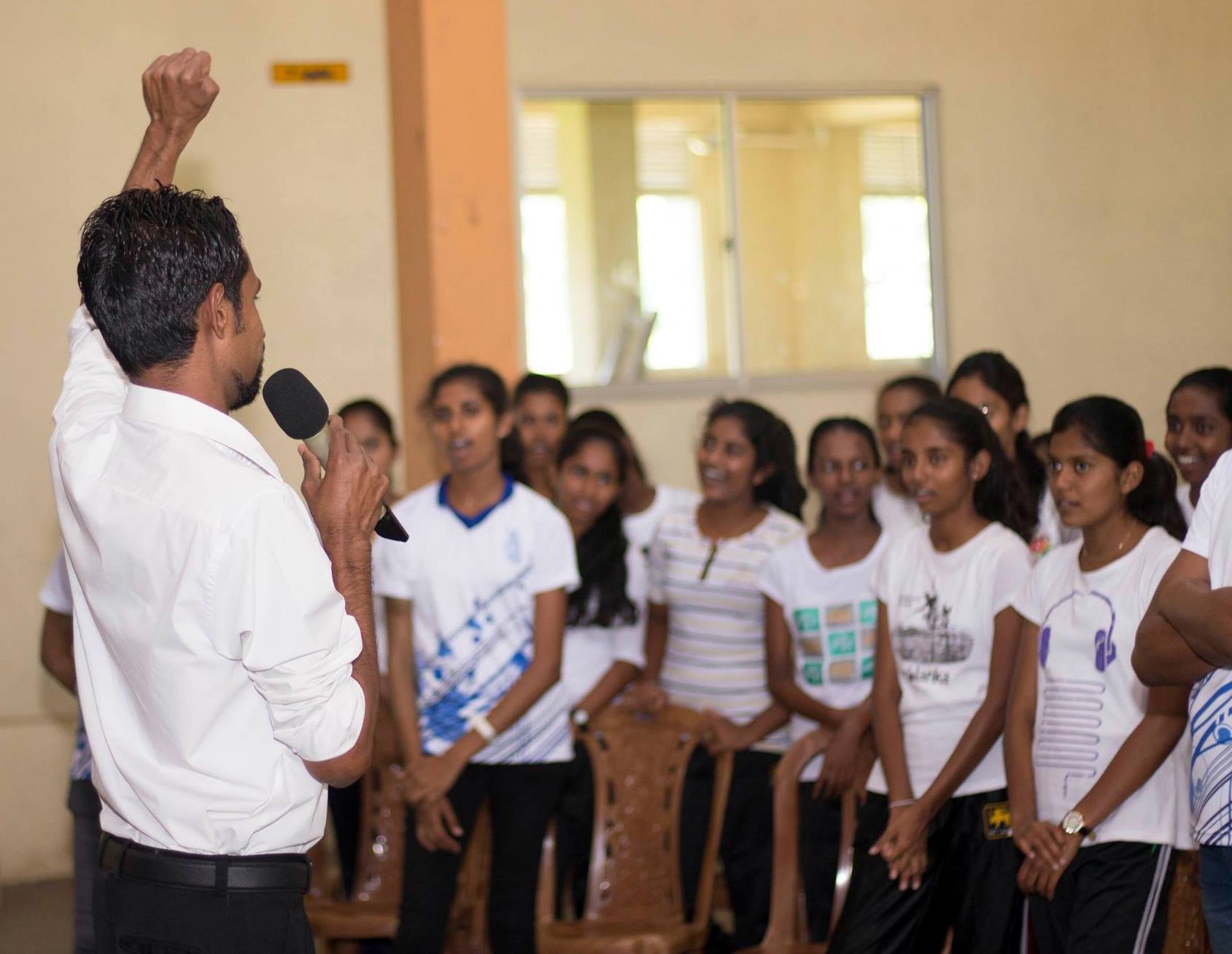 Happy Sunday everyone! Today, we at Happinez would like to introduce you to Sachinda Dulanjana. If you do not know him already, he is currently a consultant working on youth work, human rights, and volunteerism as well as a motivational speaker and leadership trainer. He works as the Lead Trainer for Global Platform Sri Lanka, which is run alongside Global Contact Denmark. Aside from this, Sachinda has also been a facilitator for British Council’s Active Citizens Programme for the past six years!

A fun fact about Sachinda is that he loves to play football, and when he isn’t so busy, he enjoys taking getaways to have some time to reflect. Sachinda has also been a visiting lecturer on leadership at the University of Peradeniya as well as a guest lecturer on entrepreneurial motivation at the University of Colombo. As you can probably tell, Sachinda’s passion lies in inspiring and motivating people to reach their full potential! He hopes to become a catalyst for positive change and later on become a statesman and diplomat who can uphold the values of humanity whilst taking Sri Lanka on to an era of peace.

We had the opportunity to ask him a few questions.

Sachinda said he sees himself as a young individual who could set an inspiring example for everyone out there who is worried about their potential to accomplish their life goals due to various barriers. Although emerging from the grassroots while overcoming many hardships to reach where he is today, he believes he is still in the middle of his journey – a journey which is worthwhile to have a look at for anyone who wishes to break the glass ceiling. Sachnda considers himself to be “a person who always loves to live in the moment” and so tries his best to take control of his life in order to make this moment the best moment.

“I see myself as a revolutionist who is so keen on spearheading a thinking revolution for our young generation. In that journey for thinking revolutions, I have held some key youth leadership positions in Sri Lanka such as the position of Honorable Speaker of Sri Lanka Youth Parliament 2017/19 and Official Sri Lankan Youth Delegate to the United Nations (UN) 2016/17. I have also held the position of Asia Regional Representative of the Commonwealth Students’ Association which has a special focus on student governance,” he said.

Asked how he started off in his line of work, he replied that he started as a member of the World Scout Movement by joining the 10th Ananda College Scout Troop when he was 11 years old. Being an Anandian gave him great exposure to become who he is today in the field of youth work and volunteerism, he said. Furthermore, as the Deputy Head Prefect of Ananda College, he was able to actively contribute to many community service projects such as leadership training programmes and school rehabilitation projects. With all these experiences, he founded the youth-led voluntary organisation called the “H3 Foundation – Hearts and Hands of Humanity” in 2012 with the objective of creating a convenient platform for young people to get involved as volunteers while creating a new culture of volunteerism. His educational background too complements his voluntary work as he completed his Bachelor in Social Work degree. He also completed his Master in Human Rights degree at the University of Colombo.

The 71st UN General Assembly was another important topic. He stated that it was an amazing experience where he got to see the real beauty of diplomacy at the UN Headquarters in New York itself. Sachinda co-delivered the official youth statement for Sri Lanka at the third committee of the UN General Assembly which deals with human rights, humanitarian affairs, and social matters. One of his most unforgettable moments was meeting with former UN Secretary General Ban Ki Moon. Also, as an Official Youth Delegate, Sachinda had the privilege of attending various types of important discussions and side events that took place at the UN during the General Assembly.

Sachinda also had a few very important stories to share with us, and rightfully so, we were all ears. He stated that he has seen most people criticise the role of the UN and that he too had some doubts about its level of intervention in solving global issues. But his journey to the UN had made him realise that the very existence of it does really matter.

“We cannot even imagine a world where nearly 200 countries act according to their own whims and fancies while having no collaboration at all. It would be an utter mess. I saw a quote from one of the former UN SGs on a wall at UNHQ by Dag Hammarskjöld, which stated: ‘(The) United Nations was not created to take mankind to heaven, but to save humanity from hell’.”

Sachinda also added that he personally felt that as a country, we need to do a lot more to uplift the country’s image in the field of diplomacy, human rights, and international relations, and the best way to do this is by getting energetic, knowledgeable, and skillful people to handle diplomatic relations for the country.

If there were things we could learn from Sachinda, the list would be very vast. But some important things he mentioned were about the best lessons he learnt in his career – “taking opportunities” and “being proactive”.

“We need to take control of our lives rather than being controlled by the surrounding circumstances. If you want to be an outstanding person, then you need to do something outstanding.”

Of course, we then moved on to ask him about his ideas on life as a whole. Sachinda said that the most important lesson he has learnt in life thus far is not to give up when things are getting difficult. He said that sometimes we may face career setbacks, exam failures, failures of love, etc. in moments we don’t anticipate such hardships. But we need to hold on with our hopes in such hard times, he noted, adding that he strongly believes that those difficult situations nurture us to become stronger while expanding our comfort zones. According to Sachinda, it was the hard situations that turned him into the person he is today.

We also asked him what the one lesson he would like to impart to the youth of Sri Lanka today would be. He strongly believes that as Sri Lankan youth, we must have a clear purpose and vision for our lives, and this purpose must not be just to accommodate one’s own needs, but something beyond to serve humanity as well. Having such clear purposes in life will certainly help us set the path to accomplish milestones for both ourselves and our motherland while upholding the values of humanity, he explained.

He went on to say that we need to have faith in what we do because that’s the starting point, if we really need to reach our destination. Sachinda believes that in each era, every generation of youth has a specific role to play, but the question is, as young people, what are we going to leave behind for our motherland, because this is a country which had young people who selflessly fought for common causes while sacrificing their own lives. As such, Sachinda questioned: “Are we really doing our part right as a generation?”

“The lesson to share with the youth is that we need to serve humanity without looking for any benefits from it. The ultimate benefit would be your mental satisfaction. Also, the journey towards your purpose and vision in your personal life will be more solid with the voluntary contribution you make towards society. As per my personal opinion, at the end of the day it’s your happiness and mental peace which really matter,” he added.

Lastly, we had to ask Sachinda where he sees himself in the next few years, to which he told us that he will amplify his mission to empower Sri Lankan youth while supporting them to see the beauty of their own dreams. He said that he needs to show them that nothing is impossible when we really believe in our dreams, while making a genuine effort. He reiterated that he would love to engage in the policy formulation process of the country in order to bridge the gap between the grassroots level and policy formulation level.

Life of a music legend

August 12, 2019 byKusumanjalee Thilakarathna No Comments
The first memories I recall of him are those of listening to his songs as a child. I also remember going to watch an “I Don’t Know Why” concert back in 2002 with my grandmother.

Up close and personal with Sadé Greenwood

January 3, 2021 byPavani Jayasinghe Munagamage No Comments
Hello January! Those of you who have passed by Cotton Collection must have seen this beautiful young lady and wondered who she was. Well, we here at Happinez had the chance to have a chat with her las