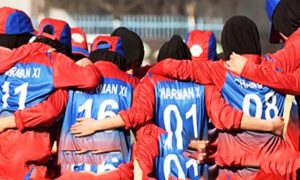 Just under a year ago there seemed to be so much hope, but now the Afghanistan women’s cricket team fears for their safety and feel abandoned by the sporting authorities they believe can help

Asel and many of her international team-mates are in hiding. Asel isn’t her real name. In Kabul members of the Taliban have already come looking for Afghanistan’s women’s cricket team.

“Every woman playing cricket or other sports is not safe right now,” she says. “The situation is very bad in Kabul.

“We have a group on WhatsApp and every night we are talking about our problems and sharing plans about what we should do. We are all hopeless,” one of the players said, BBC reported on Wednesday (1).

To be killed, if you play cricket

Asel has barely stepped outside her home since the Taliban entered Kabul in mid-August and has locked her cricket kit away. She explains how one of her team-mates was targeted in the city.

“The village where they play cricket, some people who knew them are working with the Taliban. When the Taliban came here and took Kabul they threatened them, saying, ‘We may come and kill you if you try to play cricket again,’” Asel says.

Taqwa, who is also using a pseudonym, was involved in Afghan women’s cricket for many years. She managed to flee the country after Kabul fell.

In the week before she got out, she moved from house to house to avoid being detected. The Taliban called her father, but he said he had not been in contact with her.

“I don’t want to think about what would’ve happened,” she says. “When the Taliban came to Kabul, for a week I didn’t eat anything, I didn’t sleep.

“I was not only thinking about myself, I was worrying about my girls. They are sacrificing their lives, their studies. Some even didn’t get married so they could play for Afghanistan. I’m very worried about their lives.”

For another former player, Hareer, again speaking to the BBC using an assumed name, playing cricket as an Afghan woman meant far more than just taking wickets and scoring runs.

“When I play, I feel like a strong woman,” she says. “I feel confident and I feel proud of myself.

“I can imagine myself as a woman who can do anything, who can make her dreams come true.”

But for Hareer and the rest of the Afghanistan women’s cricket team, those dreams may well have come to an end.

When just under a year ago there seemed to be so much hope, now they fear for their safety and feel abandoned by the sporting authorities they believe can help.

August 14, 2018 byMalik No Comments
Australian batsman Steve Smith has returned to the top of the Test batting rankings, despite being banned from playing in the format since March.