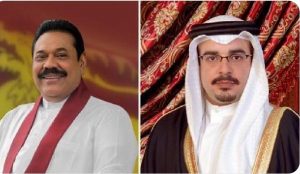 The Deputy King and Mr. Rajapaksa had reviewed the progress of bilateral ties as well as highlighting the importance of further strengthening cooperation across various areas.

Mr. Rajapaksa in a tweet said Deputy King Salman recalled and appreciated the efforts made to sustain peace and stability in Sri Lanka from the time of his Presidency.

February 10, 2021 byMihi Perera No Comments
The Uva Province Governor A. J. M. Muzzamil has suspended the operations of the Badulla Municipal Council and it has been placed under a special commissioner.

May 27, 2021 byMihi Perera No Comments
Speaker of the Parliament Mahinda Yapa Abeywardane has put his signature today (27) validating the Colombo Port City Economic Commission Bill which was passed in Parliament on the 20th May 2021.