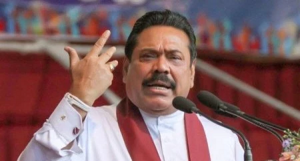 Prime Minister Mahinda Rajapaksa has called for the appointment of a joint committee to restructure the Excise Department of Sri Lanka.

The Prime Minister stated this at a discussion held yesterday (30) at Temple Trees with trade union representatives to discuss the issues of excise officers.

During the meeting, the Prime Minister drew attention to the professional issues of the Excise Officers and instructed them to immediately stop the transfer of excise officers due to political pressure and to transfer only qualified officers.

Accordingly, steps should be taken to transfer the excise officers working in the beneficiary areas according to the transfer procedure in due course, the Prime Minister said.

October 29, 2018 byThe Sunday Morning No Comments
The security of former Prime Minister Ranil Wickremesinghe has been reduced 1008 to 10.

July 6, 2021 byMihi Perera No Comments
Energy Minister Udaya Gammanpila says that the news reported by several media outlets which claim that there will be a shortage of petrol in the country in the future are baseless.