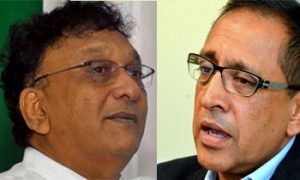 Prime Minister Ranil Wickremesinghe has ordered the Prime Ministerial Secretary to make necessary arrangements to facilitate the removal of the Ceylon Petroleum Corporation (CPC) from Minister Kabir Hashim’s purview and to re-assign it to Minister Lakshman Kiriella.
Sources at Temple Trees told The Sunday Morning that the Prime Minister’s letter on the matter was handed over to Prime Minister’s Secretary Saman Ekanayake last week.
Sources further noted that the Prime Minister’s Secretary has in turn forwarded the letter to the President’s Secretary to facilitate Wickremesinghe’s directive.
Hashim currently holds the portfolio of Highways and Road Development and Petroleum Resources Development.
Kiriella is the Minister for Public Enterprise, Kandyan Heritage and Kandy Development.
Hashim, who is also the Chairman of the United National Party (UNP), has been supportive of party Deputy Leader, Minister Sajith Premadasa’s bid to become the UNP presidential candidate at the forthcoming presidential poll.

July 28, 2021 byMihi Perera No Comments
Former Prime Minister and Leader of the United National Party (UNP) Ranil Wickremesinghe says that Sri Lanka has fallen and its situation can be compared to that of Afghanistan.

July 12, 2021 byNews Admin No Comments
The World Youth Skills Day falls on 15 July, at a time when Sri Lanka’s education system is in an unstable state. The country affected by the Covid-19 pandemic is struggling to figure out whether the