PM is responsible for delay in PC polls 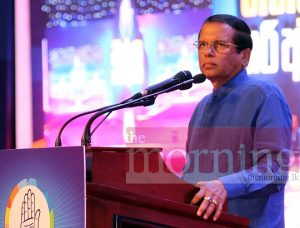 Sirisena was speaking at the  68th anniversary convention of the Sri Lanka Freedom Party (SLFP) held in Colombo.

His statement follows yesterday’s Supreme Courts decision that Provincial council elections could not be held under previous elections systems or the Provincial Councils Elections (Amendment) Act without a delimitation report.

“The Prime Minister is responsible for this.”  he said.

Speaking on the upcoming elections Sirisena said a broad progressive front will be formed and assured in 2020 an SLFP Government will be established.

Sirisena also pointed out that throughout the last three and a half years he was forced to lead an anti corruption force within the government.

“Politicians who are involved in the bond scam will be brought before the law in the new future. Steps are underway to fast track Arjuna Mahendran’s extradition”, Sirisena said.

He said Provincial council and Pradeshiya Sabha institutions were also infested with corruption. “both the Government and the opposition are responsible for this level of corruption”,  Sirisena highlighted.

Premajayantha sacked by President alone or with Cabinet consensus?

December 11, 2021 byAazam Ameen No Comments
A 3-member team from the Export Import (Exim) Bank of India visited Sri Lanka from 07-09 December 2021 to review the progress of Polgahawela and Aluthgama Integrated water supply projects, being imple