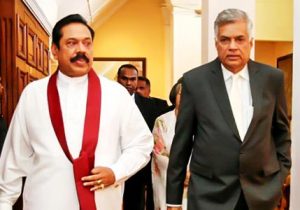 He said that Wickremesinghe had sought extra facilities, including more security, as a former Prime Minister.

Rajapaksa said that no decision had been taken on the request.

However, he said Wickremesinghe will need extra security from his own party members.

Rajapaksa was responding to a question raised at a meeting with electronic media heads today.

The Sunday Morning yesterday(19) revealed that Wickremesinghe has requested President Gotabaya Rajapaksa for a host of privileges in his capacity as the former Prime Minister.

The requests include a fully equipped office building, an official residence, a security team, and staff.

A letter to this effect had been sent to President Rajapaksa a few weeks back by the former Prime Minister.

June 9, 2020 byTSM Web Desk No Comments
The Government has agreed to look into several proposals by the private bus unions including the introduction of two work shifts for the state sector.