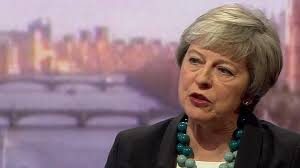 Theresa May has warned the UK faces “uncharted territory” if Parliament rejects her Brexit deal as she vowed to redouble her efforts to win MPs round.

Next week’s vote would “definitely” go ahead, she told the BBC, as she promised new safeguards for Northern Ireland and to look at giving MPs more say in shaping future EU negotiations.

The UK’s March exit was “in danger” if MPs did not back the deal, she said.

But one Tory Brexiteer said support for leaving without a deal was “hardening”.

And one senior Labour figure said she believed a general election may be inevitable “within months” if there was deadlock in Parliament and  May could not get her deal through.

A deal on the terms of the UK’s divorce and the framework of future relations has been agreed between the prime minister and the EU – but it needs to pass a vote by MPs in Parliament before it is accepted.

MPs are expected to be asked to vote on it on either the 14 or 15 of January.

The crunch vote was due to take place in December but was postponed at the last minute as May faced almost certain defeat amid opposition from many of her MPs, as well as Labour and other parties.

Asked by the BBC’s Andrew Marr if the vote would “definitely” go ahead in the second week of January, she replied “yes, we are going to hold the vote”.

She said she truly believed hers was a “good deal” for the country and that it was up to its opponents to spell out the alternatives to it. (BBC)

Update: Four dead after rioters stormed the halls of Congress in DC to block Biden’s win

January 7, 2021 byLahiru Pothmulla No Comments
Four people are dead -- including one woman who was shot -- after supporters of President Donald Trump breached one of the most iconic American buildings, engulfing the nation's capital in chaos after

Trump and Kim to start Vietnam summit with dinner