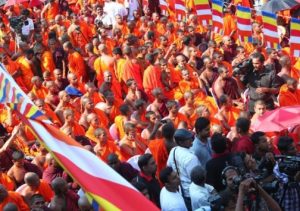 The Bodu Bala Sena (BBS) is expected to rally a 10,000-strong bikkhu conference today at the Bogambara Stadium in Kandy from 2 p.m. onwards.

Named as the Siv Hele Maha Samuluwa, the conference will be attended by the Mahanayakas of the three monastic fraternities of the Amarapura Nikaya, Siyam Nikaya, and Ramanya Nikaya. They will also be joined by supportive laypersons, the BBS Media Unit said.

“We should not allow history to repeat itself and taking lessons from the recent incidents, we believe it is our responsibility to rally all the citizens and create awareness on how to live in harmony. Keeping that in mind, we have prepared the Bogambara Declaration which we will present at the rally. The declaration will list an action plan to achieve much needed co-existence by exercising a law common to all citizens of Sri Lanka,” BBS General Secretary Galagoda Aththe Gnanasara Thera told reporters.

The conference is scheduled to conclude at 5 p.m., the BBS Media Unit confirmed.

When contacted, the Kandy Police informed The Sunday Morning that 500 police officers would be deployed at the event.

“They have obtained a loudspeaker permit which allows them to use such instruments within the stadium premises and since they are expecting a crowd of over 10,000, if required, we will seek assistance from the Special Task Force (STF),” the Kandy Police station confirmed.

December 11, 2021 byAazam Ameen No Comments
Over 8000 chickens have perished following a fire which broke out at a poultry farm, Sri Lanka Police said.