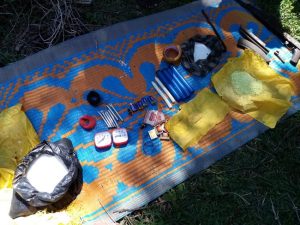 The Police have uncovered a stash of weapons and explosives  in Palamunai, Ampara area believed to have been hidden by members of Easter Sunday attacks mastermind Zahran Hashim’s group.

Difficult decisions should be taken to manage the economy: Keheliya

June 15, 2021 byMihi Perera No Comments
Minister of Mass Media and Information, Cabinet Spokesman Keheliya Rambukwella says that in the current situation, even the most difficult decisions have to be taken in managing the entire economy of