The Govt. must start pulling the economy in one direction

We are just over five months away from the 25th anniversary of Sri Lanka’s 1996 Cricket World Cup victory, which is still engraved in every Sri Lankan’s mind. Since then, our players have gone on to break world records and build legendary careers. They have been named in many Greatest XI lists and represented all the major cricket leagues around the world. Therefore, it is clear the quality of our cricketers has improved in leaps and bounds over the past quarter of a century, and we even secured a T20 cricket World Cup in 2014.

However, cricket’s greatest prize has eluded us since 1996 so it is interesting to re-evaluate the contributory factors of the 1996 victory. It is my belief those key takeaways will provide us with some insight on strategies to overcome the current economic storm. There are many elements and ingredients in mapping out the winning formula. However, I see two main contributory factors.

First is the “stability of the team”. Second is a combination of all other factors along with the cricket administration, which I like to call cricket-political stability, or “crickelitical stability”, if you will. The 1996 team was not a star-studded team. Most of them became stars after playing the World Cup, including Sanath Jayasuriya, Muttiah Muralitharan, and Chaminda Vaas. It was the above two factors that made them world champions, which have unfortunately remained unattainable to Sri Lanka, even following 25 years of advanced investments and resources.

In an economic context, similar to the cricket team, “policy stability” and “political stability” are both extremely important. Sri Lankans have never had the luck to experience the joy of a World Cup victory in economic terms. This can be mainly attributed to Sri Lanka’s excessive focus on political stability rather than policy stability. The economic equivalent to a World Cup victory in the Sri Lankan context would be achieving lower poverty rates and reaching a GDP per capita of above $ 10,000. This, in my opinion, remains an elusive dream. Over the years, the business community and policy analysts have been highlighting the importance of policy stability and consistency, but we have failed on both fronts.

Lessons from the previous Government

Initially, the last national Government had a two-thirds majority in Parliament. However, policy stability was non-existent. Different parts of the Government functioned with opposing views which resulted in public policy being pushed in two opposing directions. This filtered down to all levels of government. 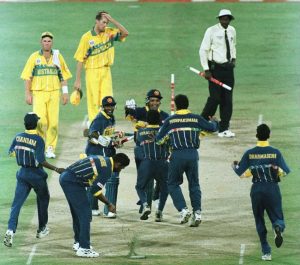 The then Prime Minister’s policy statement and the Budget Speech by the then Finance Minister prioritised two different policy agendas. Significant salary hikes for the public sector which were not affordable to the state balance sheet, and revising the VAT (value-added tax) rate several times, are a few examples of policy inconsistency. The Vision 2025 policy statement which was the main policy agenda of the Government, was released a considerable time after taking over office. Moreover, in implementation, it was not given equal priority by all sections of the Government. The Cabinet Committee on Economic Management (CCEM) was then replaced by the then President with the National Economic Council (NEC), which was later dismantled by the then President himself. This resulted in a major setback, since important policy decisions took place without sufficient deliberations, thereby leading to further policy inconsistency within the Government.

Cabinet reshuffles on key portfolios were observed a few times. The constitutional crisis that emerged with the appointing of a new Prime Minister was a key highlight of the island’s policy instability. It goes without saying that this level of instability and inconsistency is beyond the capacity of a small economy in the Indian Ocean. Policy stability and consistency is something that cannot be achieved only at the top level. Consensus between political leaders executing government functions in order to get something done is political stability. The policy implementation team and the execution of those decisions have to fall in line with the policy. It is only then that we can achieve policy stability.

There are so many things that can get held up at the lower level, starting from misplacing documents. This may have a significant effect on policy implementation, especially if we fail to get policy execution in line with the policy agenda. The World Cup victory in 1996 was a team effort where everyone contributed equally at all levels, from the team manager to the water boy. Another important element is political stability in Sri Lanka. This requires policy stability in the economic front, especially to overcome the current crisis.

In completing one year of being in power, the current Government should be extra cautious and re-evaluate their performance on realistic measures. The accuracy and relevance of their actions, policy consistency, and stability should be the Government’s priority.

Last week’s Economic Summit organised by the Ceylon Chamber of Commerce highlighted a few sentiments that are reflective of some elements of policy inconsistency.

The Governor of the Central Bank highlighted the importance of self-sufficiency with an emphasis on state sector-led development as a key strategy to support local industries to navigate these uncertain times. The Governor expressed his lack of interest in resorting to advice or support of any foreign agencies.

This statement was followed by a session where the Chairman of the Export Development Board (EDB) and Director General of the BOI (Board of Investment) emphasised on the importance of the Government simply playing the role of an enabler. They highlighted the importance of the private sector in driving economic growth and exports. Furthermore, they reiterated the importance of attaining knowhow and capital through Foreign Direct Investments (FDIs). This, in their opinion, was the only way forward, if Sri Lanka is to seriously consider development.

For any economy to thrive there are few drivers that come into play. The ability of the people to connect with the economy and link with global production networks has become a fundamental necessity of the modern world. However, the question remains as to how we can achieve the above and if we will ever get implement the reforms to enable this.

From a public policy perspective, “self-sufficiency” stands in contrast to driving global trade, increasing exports, getting connected to global production networks, and FDIs. They are opposing policy outcomes. Having such opposing policy outcomes makes it difficult for a government to have a twin strategy to approach problems which are interconnected and it sends mixed signals to markets.

A common mistake of many governments that is attributed to their failure is their inability to consider the economy in its entirety. FDIs, exports, exchange rates, labour market, debt management, and all other factors of the economy are interconnected. If we fail to look at an overall picture and only target certain sections of the economy, policy instability will be inevitable. This in turn leads to a vicious cycle of political instability. Sadly, this has been Sri Lanka’s excruciating reality for a while.

This vicious cycle is precisely what this administration must strive to avoid.

In my opinion, getting the reforms done, expanding our connectivity to global value chains, and letting the private sector drive the economy is of paramount importance.

Policy stability goes beyond keeping the tax rates consistent or retaining certain sectors as priorities. It requires cohesiveness from all levels. Mainly at the implementation level where there has to be a continuous follow up between the different actors, while simultaneously keeping in mind the overall picture of the economy. It is about creating an ecosystem between sectors where all sectors work at an optimum capacity and level. The only way to do it is to allow the price mechanism to lead the market and let the resource allocation be done based on market prices.

If Sri Lanka is looking for a World Cup-winning era in terms of our economy, we must focus on policy consistency and stability, while maintaining political stability.

(The writer is the Chief Operating Officer of Advocata Institute. He can be contacted via dhananath@advocata.org. The opinions expressed are the author’s own views. They may not necessarily reflect the views of the Advocata Institute or anyone affiliated with the institute)

November 24, 2020 byNethmi Liyanapathirana No Comments
Despite the growth focus of Sri Lanka’s 2021 budget, Moody’s said yesterday (23) that it does not expect it to provide a meaningful boost to output.

Training with an ROI: The Luminary Learning technique