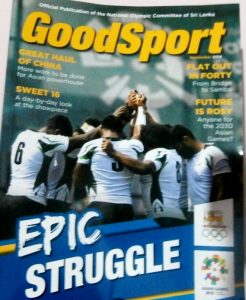 Prime Minister Ranil Wickremesinghe said it is the politics that win the game in the present local Sport Associations. He said so at the launch of the international-standard sports magazine named ‘Good Sport,’ published by the National Olympic Committee (NOC), at Shangri-La hotel, Colombo Thursday, 27 September evening.

“The sad fate in our cricket is an example,” elaborated the Premier.

“We have talent. There is no dearth of talent in Sri Lanka but they are not used for the right purposes. There has to be some results. We have initiated changes to the Sports Law of the country. I’ve initiated a new sport fund as well. The launch of this magazine is important. Sport starts at the cradle. We need to rebuild our sport from the school level.”

Veteran sports journalist Alvin Sally is the Editor-in-Chief of ‘Good Sport’. He was the chief sportswriter for The South China Morning Sport in Hong Kong for over two decades.

‘Good Sport’ will be a quarterly publication. 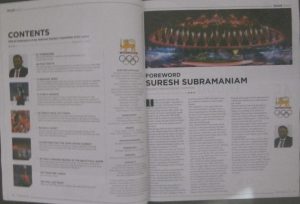 This magazine is key part of the NOC’s new executive committee’s strategy. It has a twin-pronged goal: to raise the profile of all sports in the country and to call for the support of the corporate community for without them sports will find it hard to make the breakthrough.

‘Good Sport’ will come out every three months. It will be updated online in between publications.

In the past eight decades Sri Lanka has produced only two Olympic medallists. Let’s hope in the next eight years, we will be able to double that number and raise the profile of sport in this country.

The first step has been taken today, right here. It is also the first step since the launch of the Rs. 50 million Prime Minister’s Sports Fund. Sports is moving in the right direction.