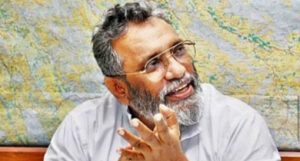 Election Commission Chairman Mahinda Deshapriya yesterday said that the commission was ready to hold an election anytime soon, if Parliament or the Supreme Court gives consent to go ahead with either the provincial council (PC) or presidential elections this year.

Deshapriya told The Sunday Morning that the decision to hold elections should be taken by Parliament, and not by the President.

“There are two elections due this year. One is the PC election and the other is the presidential election, which will depend on the decision given by the Supreme Court,” he said.

A total of eight out of nine PCs are currently defunct and managed by governors of the respective provinces with the network of public officials.

The term of office of the Uva Provincial Council will end on 8 September this year.

Last month, the Sri Lanka Freedom Party (SLFP) said it would seek the Supreme Court’s opinion regarding the President’s term of office.

From the frying pan into the fire

March 26, 2022 byNews Admin No Comments
A toxic cocktail of issues that are multiplying at a rate is pushing Sri Lanka and its 22 million inhabitants closer to the brink, while the elected Government appears to have clearly run out of optio

August 7, 2020 byTSM Web Desk No Comments
Adverse weather conditions experienced recently have resulted in interruptions to the power supply in several districts in the country, the Ministry of Power and Energy has stated.