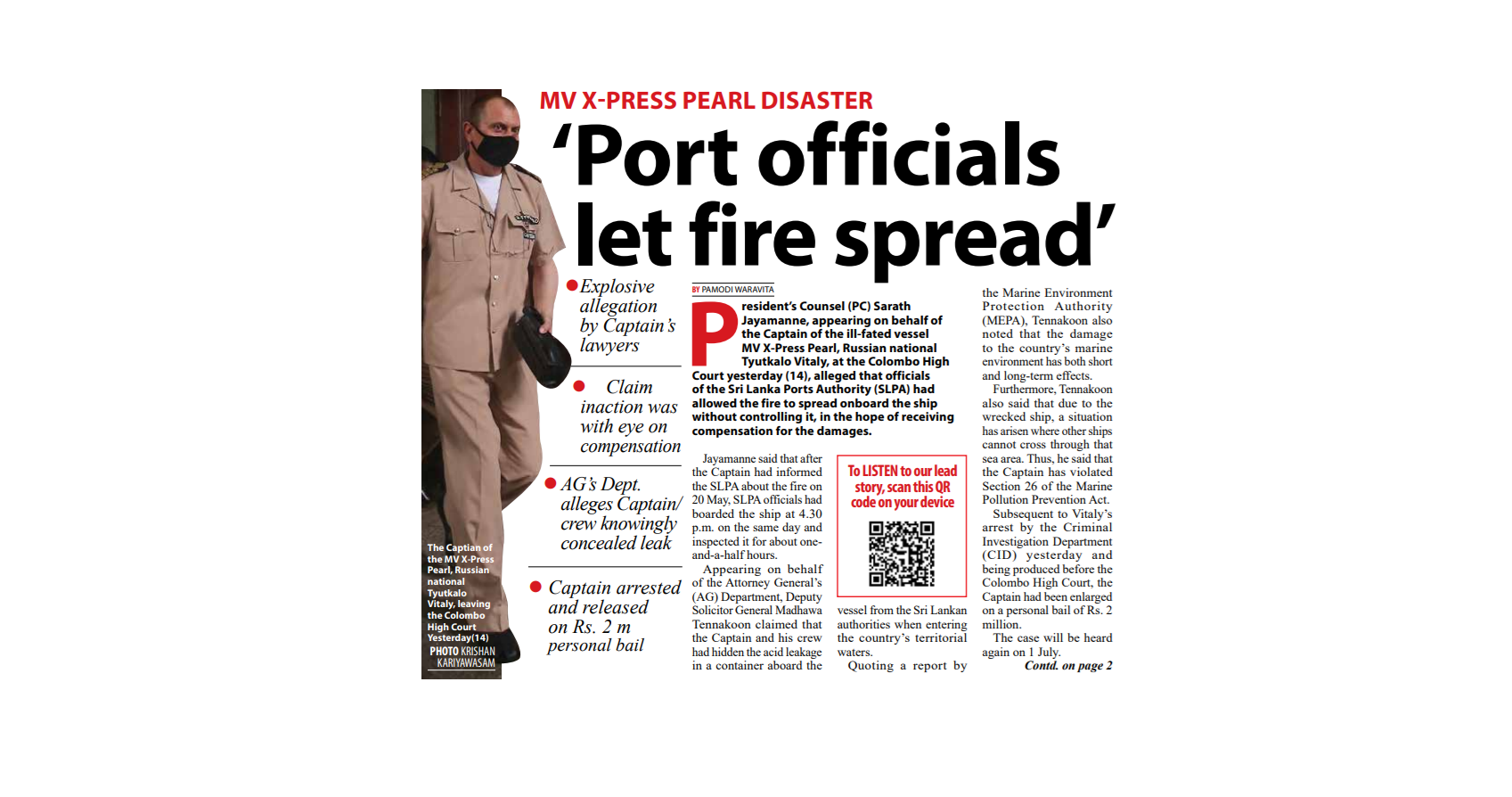 President’s Counsel (PC) Sarath Jayamanne, appearing on behalf of the Captain of the ill-fated vessel MV X-Press Pearl, Russian national Tyutkalo Vitaly, at the Colombo High Court yesterday (14), alleged that officials of the Sri Lanka Ports Authority (SLPA) had allowed the fire to spread onboard the ship without controlling it, in the hope of receiving compensation for the damages.

Jayamanne said that after the Captain had informed the SLPA about the fire on 20 May, SLPA officials had boarded the ship at 4.30 p.m. on the same day and inspected it for about one-and-a-half hours.

Appearing on behalf of the Attorney General’s (AG) Department, Deputy Solicitor General Madhawa Tennakoon claimed that the Captain and his crew had hidden the acid leakage in a container aboard the vessel from the Sri Lankan authorities when entering the country’s territorial waters.

Quoting a report by the Marine Environment Protection Authority (MEPA), Tennakoon also noted that the damage to the country’s marine environment has both short and long-term effects.

Furthermore, Tennakoon also said that due to the wrecked ship, a situation has arisen where other ships cannot cross through that sea area. Thus, he said that the Captain has violated Section 26 of the Marine Pollution Prevention Act.

Subsequent to Vitaly’s arrest by the Criminal Investigation Department (CID) yesterday and being produced before the Colombo High Court, the Captain had been enlarged on a personal bail of Rs. 2 million.

The case will be heard again on 1 July.

The MV X-Press Pearl ship caught fire on 20 May approximately nine nautical miles away from the Colombo Harbour, after having anchored there a few hours prior to the fire. A subsequent explosion on 24 May led to the fire spreading and a number of containers aboard it falling into the sea, thus releasing pollutants and chemicals including plastic pellets into the water. Both the fisheries industry and the country’s marine environment have suffered heavily as a result of this incident.

Residents in self-quarantine in Jaffna: Test negative for Covid-19

June 15, 2020 byTSM Web Desk No Comments
The residents of the houses in Jaffna that were quarantined have tested negative for Covid-19, The Morning learnt.

October 29, 2020 byCharindra No Comments
Army Commander Lt. Gen. Shavendra Silva appealed to the public to exercise maximum restraint and avoid congested gatherings as much as possible to avoid further transmission of Covid-19.