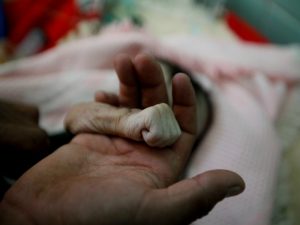 While the Government sought parliamentary approval last week for a supplementary estimate of Rs. 56 billion on expenditures which include the purchase of a bulletproof luxury vehicle for Opposition Leader Mahinda Rajapaksa, a 11-month-old Malik Mihiranga Rajapaksa – from the very district of the Opposition Leader – passed away last month, allegedly from malnutrition due to the abject poverty his family suffers from, similar to the millions of other families scattered across the country.

The deceased was the youngest of a family. His father, Thusitha Chandana Rajapaksa, earns a meagre living as a fish vendor and the entire family depends on his livelihood for survival.

Women for Rights General Secretary Samanmali Gunasinghe, speaking to The Sunday Morning, said that the poverty situation in the country was at its highest.

“We are number four in the world malnutrition index. Over three million families in the country are below the poverty line and are struggling to survive each day. There were reports of families surviving off plant leaves and stems in the Anuradhapura District while others were of families committing suicide in fear of starvation,” she said.

She charged that successive governments had betrayed the people and failed in their duties to look after the masses.

“They built six-lane highways, airports that don’t frequently operate, and ports where ships don’t dock. And now, the Government wants to spend Rs. 45 million on a bulletproof car for the Opposition Leader. The allegations that governments only want the commissions from these mega development projects and not the betterment of the people have been proven true. This wanton excessive spending by the Government on themselves must stop,” Gunasinghe noted.

She blamed the Government for neglecting the wellbeing of the masses and demanded that the pressing issue be addressed.

It is time politicians stopped thinking about themselves only and worked in service for the people who elected them into power. It is high time that the voters’ actual problems are resolved. We urge the Government to use the monies spent for luxury cars to help those in the rural districts suffering from poverty and related problems such as malnutrition,” she added.

Janatha Vimukthi Peramuna (JVP) Leader Anura Kumara Dissanayake questioned in Parliament if the Government had looked into the death of the child and if action would be taken to compensate the family.

Meanwhile, United People’s Freedom Alliance (UPFA) MP Namal Rajapaksa pointed out that the family had been taken out of the list of those receiving the Samurdhi benefits. In response, Minister of Health Dr. Rajitha Senaratne said the child had not died from malnutrition.

Senaratne said the family had failed to procure the “Triposha” supplement given free by the State and had also failed to give the medicines that had been prescribed. The Minister said that the child had died from diarrhea.

A women’s rights activist and resident of the Hambantota District, Prema Gamage said that it was still unclear as to whether the child had actually died of malnutrition as the media had reported or whether it was due to some other cause.

“It is hard to say exactly how the death had occurred. The medical report says that there had been no food in the child’s stomach, but we must take into account that an 11-month-old consumes mother’s milk as well as solids,” she said, noting that it could have been negligence by the mother for failing to feed the baby or even due to an illness.

However, Gamage noted that the level of poverty in the country had increased and the situation must be rectified. “Authorities must take steps to resolve this situation as it is fast becoming worse,” she added.

November 1, 2020 bySarah Hannan No Comments
Amidst the many land grab, encroachment, and deforestation incidents that were taking place, it was recently uncovered that state land had been occupied by its workforce who had allegedly been squat

Losses of state enterprises: A crisis on the rise

July 10, 2021 byNews Admin No Comments
Sri Lanka’s state-owned enterprises (SOEs) continue to suffer massive losses for a prolonged period. As per the Mid-Year Fiscal Position Report 2021 released on 30 June, the total loss of the 52 major