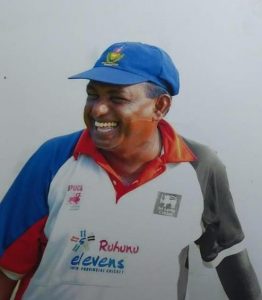 Let’s talk a bit further about “Praveen Jayawickrama”, the hottest topic of the day in a pandemic-ravaged Sri Lanka.

“He was born and bred in Kalutara. His house is, in fact, near our house. We are in a place called Alwiswatta in Palatota, bordering the Kalutara Police Training College (PTS),” said Nimal Dabare yesterday (3 May), talking to the Morning Sports from Kalutara.

The PTS is situated about 3 km away from the Kalutara town, on the Kalutara-Palathota-Nagoda Road. Dabare is the current Head Coach of Holy Cross College, Kalutara, the place where our hero Jayawickrama learnt his cricket, under Dabare’s watchful eyes. 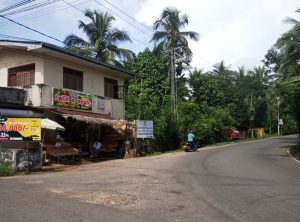 Jayawickrama is the ninth Test player produced by Kalutara altogether and he is also the second Test cap from Holy Cross after Jayantha Silva, another left-arm spinner like Jayawickrama, who played for Sri Lanka during 1995-98.

Praveen not from Moratuwa

It is erroneously mentioned in some media that Jayawickrama is another “proud product” of the cricket-rich Moratuwa. In fact, it is not. According to Dabare, who was Praveen’s coach right throughout the player’s school cricket career, the youngster had been with the Kalutara Holy Cross College for “eleven years and six months”.

“I know he played one season that was his last school cricket season for St. Sebastian’s College, Moratuwa,” Dabare further clarified. 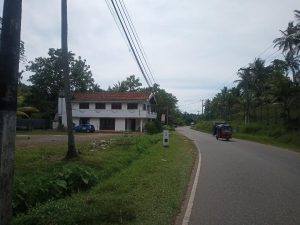 “Pathum is from Alwiswatta. Dilshan is also from here. Now Praveen is too from here,” Dabare remarked, highlighting proudly the small Alwiswatta’s notable capability of producing international cricketers!

“Their houses are only 200 metres apart,” stressed Dabare.

From fast to spin bowling

“Praveen’s father passed away about five years ago. He too had studied at Holy Cross College. His mother studied at the nearby Holy Family Convent, Kalutara. From the U-13 level onwards, Praveen had been with me in the Holy Cross,” said Dabare, who also gets the credit for turning the early left-arm fast bowler into a left-arm spin bowler.

“The reason for me to take that decision was because he didn’t have enough weight for a fast bowler, even though he had his height even by then. We usually make such decisions by considering the player’s future. Praveen would have lacked the required strength for a fast bowler when he had reached the senior level,” he explained.

The glorious Test debut Jayawickrama had is, one way, a pure thanksgiving for the confidence that his school had had on him since he was actually a child.

Still Holy Cross is a strong contender in the national inter-school circuit. It reached the semi-finals recently in the highly competitive all-island U-19 division-2 tier-A. Dabare has been their coach since 2011.

Holy Cross, his family, and education 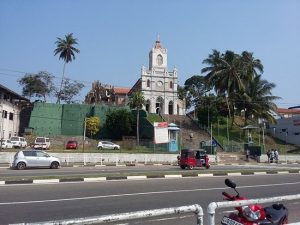 “Even at present, we have three Holy Cross products in the Sri Lanka U-19 pool out of a total of 30 players. They are Nilaksha Kasun and Arosh Bhagya, who are both fast bowlers, and Sasanka Nirmal, another left-arm spinner like Praveen,” Dabare remarked.

“Praveen’s whole family has a wonderful interest in cricket. His father was the one who sent Praveen to cricket. After his father’s passing, Praveen is looked after by his mother, aunt, and grandmother, who continued to give a great support for his cricket. Praveen also has one elder brother and two younger brothers too,” described the coach.

“It is also notable that his family practises both Catholic and Buddhist rituals because his parents had had a mixed religious background. I can say that Praveen is a very lucky boy. He has a markedly honest character. He did his education also reasonably well and got through his O/L examination quite successfully.”

“In 2015 when we played division-one, Praveen took 56 wickets in 11 matches. That was his best season, I can remember. A breaking point.”

Coach’s advice before the Test

“Talking to me from Kandy over the phone before the Test, Praveen informed me that he had been picked for the final XI for the (second) Test and he also said he was ready to take wickets. I told him that he would have to work really hard to do so because I expected the Pallekele wicket to assist the batsmen better. Therefore I asked him to use a lot of variation,” he said.

“Praveen has a special ability to bowl the ‘armer’ which skids through towards the right-hander off the pitch, instead of going away from them, like how a normal left-arm delivery would do. Only Rangana Herath had bowled that ‘armer’ delivery for Sri Lanka at top level. With that ball, your chances of trapping a right-hander lbw are a plenty,” explained Dabare.

“You can see the dismissal Tamim Iqbal in the first innings (Iqbal was the top-scorer in that innings with 92 runs). That was the ‘armer’. The left-hander expected Praveen’s ball to come his way, but the ball went away from him and took his outside edge.”

More on “the armer” ball 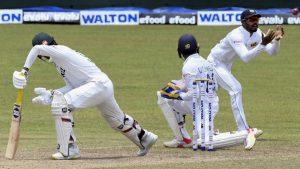 “During Dav Whatmore’s time (1999-2003), all district coaches were taught how to bowl the ‘armer’. Our boys at Holy Cross first trained that on the college matting wicket. We later played a lot of cricket at the Maggona Surrey Grounds where there is a turf wicket. That’s where we mastered the ‘armer’ delivery,” recalled Dabare.

“When he talked to me before the Test, I asked Praveen to get ready to bowl his ‘armer’ very wisely. That was the weapon that eventually helped him take a lot of wickets in the match,” he further added.

“I think it was Herath who used the ‘armer’ in a great manner in world cricket. Presently India’s Axar Patel and Ravindra Jadeja too bowl it really well,” he went on elaborating.

In his heydays as a player in the late 1980s, Dabare was one of the best all-rounders in the city. A common thought that still prevails in Kalutara cricket circles is that Dabare could have easily gone on to play for Sri Lanka but was unfortunate to miss the great honour.

“I set a record for the Kalutara Vidyalaya versus Tissa Central annual Big Match top score by making 96 in the 1988 match. There I bettered a 12-year-old record, I can still remember. In the same year, I became the first batsman to score thousand runs from Kalutara in school cricket. I scored 1,306 runs in 14 matches that year, including five centuries and five fifties,” recalled Dabare proudly.

“Ranjan Paranavithana (the veteran sports journalist and former national cricket selector) was my coach at Kalutara Vidyalaya right throughout.

“I used to play club cricket since I was 17. I played for Kalutara Town Club (KTC), under Jayantha Paranathala, and the Kalutara Physical Cultural Circle (KPCC) in Sara Trophy (the highest domestic division then) during the late eighties and early nineties. Later I played for the Education Department ‘A’ division. I carried on with my cricket until 1996 when I had to stop because of my teaching diploma,” he said.

While doing his coaching, Dabare has been a government school teacher for over 30 years. He presently teaches at another school at the Kalutara town named Velapura College whilst still nurturing young talents at Holy Cross, hoping to find another gem that could one day emulate ones like Praveen Jayawickrama, already a hero for Holy Cross, Alwiswatta, and the entire city of Kalutara.

August 29, 2018 byMalik No Comments
Novak Djokovic struggled in the New York humidity before recovering to beat Hungary's Marton Fucsovics in the US Open first round at Flushing Meadows.

December 18, 2020 byRevatha No Comments
The first Test between South Africa and Sri Lanka will begin at Centurion on Friday (26)