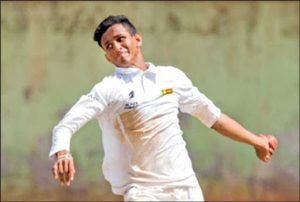 Jayawickrama, 22, made his first-class debut for Colts in the 2018/19 Premier League Tournament

The two-Test series against Bangladesh starts on 21 April in Pallekele.

Jayawickrama, 22, a student of St. Sebastian’s College, Moratuwa, made his first-class debut for Colts in the 2018/19 Premier League Tournament. Prior to his first-class debut, he had been named in Sri Lanka’s squad for the 2018 U-19 World Cup. He made his List A (the main-league for one-day cricket) debut in December 2019 for Moors.

As the Morning Sports revealed earlier, the home team is most likely to field a four-pronged spin attack against the Bangladeshis.

Jayawickrama has taken 40 wickets in 10 first-class matches so far at an average of 24.57.

“If such an all-out spin attack is to be unleashed at the visiting team, the Lankans are likely to play Lakshan Sandakan, Wanindu Hasaranga, Ramesh Mendis, and Jayawickrama in the final side,” a source added.