President addresses the nation : Will act to achieve country’s target

President Gotabaya Rajapaksa yesterday (18) called on all Sri Lankans to work together in order to take the country forward in a systematic manner in line with a policy framework to overcome the challenges before the country and pledged to take whatever action necessary to achieve the target of making Sri Lanka a prosperous nation.

The President made this observation while addressing the nation last evening to mark the first anniversary in office since being elected President at last year’s presidential election.

“Not only Sri Lanka but the whole world has reached an important milestone in history. There are many challenges ahead of us. All Sri Lankans who love their motherland must work together to take the country forward in a systematic manner, while acting according to a definite policy frame to overcome these challenges,” President Rajapaksa said. 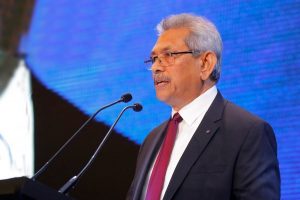 The President went on to say the country was able to defeat the LTTE terrorism, which was a major threat to the country, as a result of a collective effort, noting: “At that time, the majority of our country were committed to achieve one goal. We faced the challenges with team spirit and in a disciplinary manner.”

“We should be able to conquer the economic challenges the country is facing in the future in the same manner we won the war when most were of the opinion that we would not be able to win it. We should understand that all of us have a common responsibility in this regard. In this context, not only the politicians and officials, but also the public have the responsibility to actively contribute in increasing the production capacity of the country, to improve service efficiency, and to eliminate corruption,” President Rajapaksa noted.

The President also drew attention to the commitment to introduce a new constitution.

Referring to the battle against the drug menace in the country, the President said: “Prior to my assumption of office, many lives have been lost in this country to the activities of religious extremists. The underworld had become powerful and a wave of killings had begun throughout the country. Sri Lanka had become a haven for international drug traffickers. The country was becoming insecure due to the weakening of the intelligence and security forces. Historic sacred sites of archaeological value were being encroached by extremists. After I came into power, I appointed suitable officials in charge of the security apparatus of the country and gave them the required authority to carry out their responsibilities without any compromise. The intelligence services that had collapsed in the past were restructured and revitalised. Accordingly, we have managed to control the possibility of a resurgence of extremism in any form. A very effective and robust programme has been implemented to control the drug menace. There is no room anymore to engage in drug trafficking or operate the underworld from inside of prison cells as in the past.”

The President then drew attention to the fact that the people have given him and his Government a huge mandate to make the country prosperous while changing the traditional political culture.

President Rajapaksa also expressed hope in establishing a government that gives priority to talent or skill over relationships, gives more attention for the common needs than individual desires, motivates investments instead of obtaining loans, honour actions than words, and values the true public service than deceitful exhibitionism. “The political authority as well as the public servants should take responsibilities in this regard.”

“I am a person who has constantly faced challenges and overcame them. I am not a person scared of empty threats. I don’t have the habit of simply running away from problems. Instead, I resolve those issues. I do not want to please anyone only for the purpose of securing votes. As I have pledged, my determination is to build a prosperous nation. I will not hesitate to take whatever action is necessary according to my conscience to achieve this target.

“I love my country. I am proud of my country. I have a vision for my country. This is the motherland of all of us. Hence, the time has come for all of us to join hands as productive citizens with the team spirit and fulfilling responsibilities in a disciplined manner in building the prosperous nation we promised to our people,” President Rajapaksa finally observed.

February 13, 2020 byTSM Web Desk No Comments
The son of Janatha Vimukthi Peramuna (JVP) Founder Rohana Wijeweera told reporters that he is ready to enter politics in the future.

October 27, 2018 byThe Sunday Morning No Comments
Two Extraordinary Gazette notices have been published on the removal of Ranil Wickremesinghe as Prime Minister and appointment of Mahinda Rajapaska as the new Prime Minister.