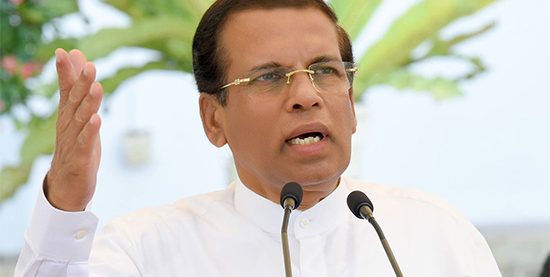 President Maithripala Sirisena said that while he could not complete some of his work as a result of the issues with the government, he is content with what he had done during his term.

Making a special statement today the President said that he established democracy in the country and ensured media freedom.

“I believe that I have done my utmost to strengthen the freedom of the press and democracy.”

The President also said that he will continue to serve the country in future as well, though not as President.

Sirisena said he will offer his support in the future to build a democratic society and a prosperous economy.

He thanked the 6.2 million voters for electing him to lead the country on 8th January 2015 adding that he did not run for a second term as he promised.

“Although I was appointed by the people for six years, it was reduced by one year. Often, the leaders in our country have used the Constitution as a custom, sometimes as a tradition, to strengthen their own power. But I am happy to say that I abolished that unlimited executive power. I have reduced the President’s term of 6 years to 5 years.”

President Sirisena also pointed out that during his tenure he accomplished a pledge other political leaders from 1947 till 2015 were not able to fulfill.

“That is, no state-sponsored killings, no political assassinations, no political reprisals, no physical violence, no damage to one’s property during my tenure. In other words, the guns of the Government did not fire at citizens for political vengeance or other hatred,” he said.

The President concluded the address extending his blessings and best wishes to the incoming President and for the children of tomorrow.