President disapproves of SOFA and ACSA 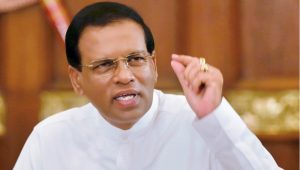 President Maithripala Sirisena has told various heads of media institutions at a meeting held today (26) that he is strictly against the proposed signing of the Acquisition and Cross-Servicing Agreement (ACSA) and the Status Of Forces Agreement (SOFA) with the United States of America.

He had also said told the heads of media organizations that he had already signed the death penalty order for 4 imprisoned drug dealers and that the order will be carried out soon.

No programme outside of Vistas of Prosperity policy will be implemented: Keheliya

February 9, 2021 byMihi Perera No Comments
Minister of Mass Media and Information, Keheliya Rambukwella, stated that the government will not implement new programmes except the necessary programmes that are in accordance with the Vistas of Pro

August 28, 2020 bythemorningeditor1 liberty No Comments
SJB National Organiser MP Tissa Attanayake said that discussions are underway to suggest an alliance between SJB and the UNP, with a probable suggestion of appointing Leader of the Opposition