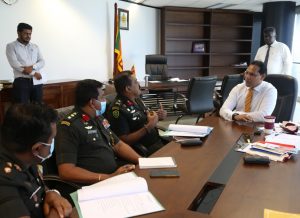 A news article was published by The Morning on Wednesday (16) under the headline “Salusala revival in six months” highlighting that the property under the purview of the Ministry of Defence was to be reacquired by the State Ministry before restoration could commence, and it would make room in the store that is now repurposed as a vehicle garage by the security units for the same.

Upon taking note of the obstacles that the State Ministry is facing in continuing the restoration process of Lanka Salusala, due to the presence of the security units, President Gotabaya Rajapaksa issued directives to President’s Security Division (PSD) Director Maj. Gen. N.D. Senarath Niwunhella to discuss the possibility of vacating the Ministerial Security Division (MSD) and PSD units occupying the Lanka Salusala premises in Jawatte Road, Colombo 05.

“During our inspection visit to Lanka Salusala earlier this month, we pointed out to the media that during the Yahapalana Government, the premises had been handed over to the Ministry of Defence, after which they moved in sections of the MSD and PSD units and arranged them accommodation facilities at the dilapidated property,” State Minister Jayasekara noted.

“Maj. Gen. Niwunhella noted that he would do everything in his capacity to ensure that the units would be vacated and the premises would be handed over to us, so we could continue our restoration and refurbishment process in the months to come,” State Minister Jayasekara elaborated.

The PSD and MSD units are to be relocated in several phases as there is a considerable amount of occupants at the Jawatte property at present.

The State Ministry is also preparing a cabinet paper that would be presented next week, formally requesting the Ministry of Defence to release the property and also requesting the necessary budgetary allocation from the Treasury to commence the Salusala revival project.

January 26, 2021 byMihi Perera No Comments
According to the Prisons Department, 54 parcels containing contraband including 47 mobile phones were thrown into the Magazine Prison between October 12 and December 31, 2020.