President to take back seat 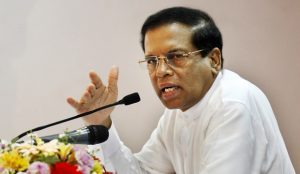 Dayasiri Jayasekara said the president has taken the decision to honor his position as Commander in Chief of the Police and security forces.

“For the first time in history the President will, to an extent put his political party aside and be independent to ensure a free and fair election,” Jayasekera said.

Professor Rohana Lakshman Piyadasa will serve as the Acting SLFP leader until the conclusion of the poll.

October 1, 2018 byEaswaran No Comments
Sri Lanka’s newest ethical news reporting platforms, The Morning and Aruna will be hosting a special educational session on ethical journalism conducted by CEO and Director of the Ethical......

February 22, 2021 byMihi Perera No Comments
Police Spokesman Deputy Inspector General of Police Ajith Rohana said that if there is any information regarding deforestation, it should be reported immediately to 1997. He said the police were ready