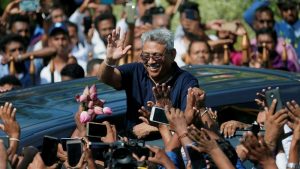 Former Defence Secretary Gotabaya Rajapaksa says that the decision to run for President in 2019 was formulated “a long time ago”.

The elder brother of former President Mahinda Rajapaksa made this statement during an interview with Al Jazeera where he firmly stated that he would “definitely’ be contesting.

He further added that his decision to renounce his US citizenship was with the intention of campaigning for the Presidential elections later this year.

There had long been speculation that Gotabaya Rajapaksa would contest as a possible Presidential candidate and renounce his foreign citizenship.

When asked how he felt of the upcoming opportunity, the former Def. Secretary stated that he sees this not as an opportunity but rather as a duty to his country and nation as he said that something he focused on is now being destroyed and that he was saddened by the current situation. (Al Jazeera)

December 19, 2019 byTSM Web Desk No Comments
The Former President’s Chief of staff  I.H.K. Mahanama was sentenced to 20 years rigorous imprisonment after he was found guilty for soliciting a bribe of Rs. 20 million.