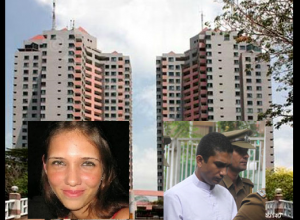 Sirisena said he had received a request for a Presidential pardon for Shramantha Jayamaha.

Jayamaha was sentenced to death in the 2005  murder of Swedish national Yvonne Johnson at the Royal Park condominium.

Sirisena said Jayamaha was sentenced at the age of 19, and now is a reformed individual. He added that the latter had also completed a PhD while in prison.

19 year old,  Yvonne Johnson, was found brutally murdered at the Royal Park Condominium in the late hours of 30 June 2005, local media reported. Jayamaha was the boyfriend of the victim’s younger sister.

In 2006 the High Court ordered a 12 year prison sentence for Jayamaha. In 2012 Jayamaha was given the death sentence by the Court of Appeal  following an application by the Attorney General’s department against the earlier verdict.

In June 2014 the Supreme Court upheld the death sentence on the convict.

Proposal made to ban wearing of face veils in public: Justice Minister

February 25, 2021 byLahiru Pothmulla 1 Comment
Justice Minister Ali Sabry said today a proposal has been made to the Cabinet to bring in laws to ban the wearing of face veils, that could pose a threat to national security, in public.