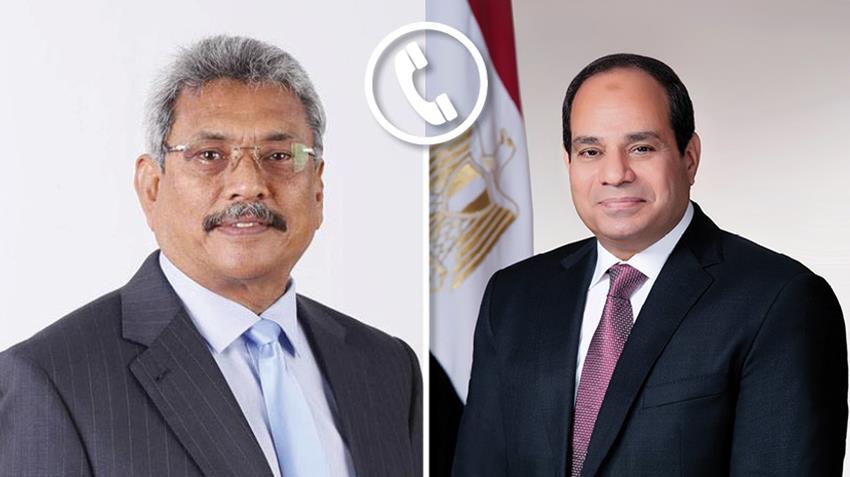 
“During the call, efforts to exchange multifaceted experiences between the two countries were discussed, including combating Covid-19 and strengthening co-ordination and co-operation on anti-terrorism efforts being one of the main challenges faced by the two countries. President Rajapaksa praised Egypt’s efforts to combat terrorism internally and regionally as well as the initiatives taken to counter extremist ideologies.

In this respect, the pioneering role of Al-Azhar University of Egypt and its affiliated institutions in combating extremist ideologies and disseminating the enlightened teachings of Islam, were further commended,” an embassy press release stated.


It went on to say that President Rajapaksa has expressed pride in the distinguished relations Sri Lanka has always had with Egypt while stressing the importance the country attaches to strengthening bilateral relations in all fields as well as in various international fora. This has been prompted by the pioneering role that Egypt plays at the regional and international levels and its valuable role in the field of combating terrorism and achieving security, stability, and peace in the Middle East, it added.


President Al Sisi had affirmed that Egypt welcomes all efforts to intensify co-operation with Sri Lanka in various international fora, especially in light of the historic bilateral relations existing between the two countries and stressed Egypt’s keenness to strengthen bilateral co-operation between the two countries, especially in the economic domain including joint investments.


Egypt was the first Arab and African country to establish diplomatic relations with Sri Lanka in 1957. Egypt was one of the 21 countries that spoke on behalf of Sri Lanka during the interactive dialogue on the United Nations (UN) Human Rights High Commissioner’s report on Sri Lanka at the ongoing 46th Session of the UN Human Rights Council (HRC) in Geneva.

May 4, 2022 byNews Admin No Comments
Janatha Vimukthi Peramuna and National People’s Power Leader MP Anura Kumara Dissanayake’s revelations about corruption that had plagued the country over the past decade is a new experience to Sri Lan

June 17, 2021 byAazam Ameen No Comments
One section of the landmark De Soysa building in Slave Island which was built in the late 1870’s had collapsed on Wednesday night (16), after a tree fell on to the structure, The Morning learnt.