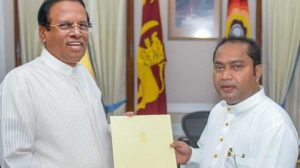 Isura Devapriya who was the former Chief Minister of the Western Province has been appointed as the chairman of the Central Environment Authority a short while ago.

In addition, Professor N.P. Rathnayake who initially served as the Head of the Department of Earth Resources Engineering of the University of Moratuwa has been appointed as the new Vice Chancellor of the Ocean University of Sri Lanka.

President Maithripala Sirisena had handed over the letters of appointment to the duo at the Presidential Secretariat last morning (20).

October 2, 2020 bythemorningeditor1 liberty No Comments
The Ministry of Health has issued a warning to the masses over the spread of rat fever with 6,096 cases being recorded this year, of which 70 were fatalities.

72 virgins was the reward for Zahran’s act of Jihad: Prof. Rohan Gunaratna

November 19, 2021 byRuwani Fonseka No Comments
Zahran Hashim's ideology was that one of the rewards awaiting those who perform Jihad was 72 virgins in heaven, said Director General of the Institute of National Security Studies Prof. Rohan Gunaratn