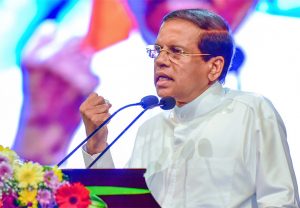 President Maithripala Sirisena slammed the Government as well as the Opposition for opposing the implementation of the death penalty on serious offenders of illegal drug trafficking.

He made this comment at an event held today (01) at the Sugathadasa Stadium to mark the end of the island-wide National Drug Prevention Week.

He provided the system implemented by the Philippines as an example as well, however, while saying that he will not follow the Philippines system but would have if he could.

Towards a values based education

May 6, 2021 byNews Admin No Comments
Gone are the days when almost every student in a classroom said that their ambition was to become a doctor, engineer or a teacher. However, Sri Lanka is yet to be done away with that mindset that cont